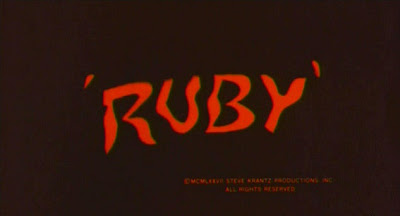 Spoofing The Exorcist while at the same time trying not to, Ruby was a B-Grade cheese fest that mish-mashed gangster violence, supernatural possessions, and the old fashion slasher movie killings. Now the creative geniuses behind it made up their mind sooner, we would have a decent slasher to enjoy from the late 70s before Carpenter's Halloween. 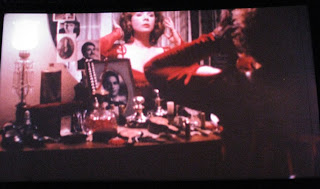 Sixteen years ago, a mob gal named Ruby Claire met up with her beau in the secluded part of the backwoods swamp, only to have their romantic moment cut off by a raging mob posse and their machine guns. Down goes lover and out goes Ruby's labor.

In the now, which is 1951, Ruby is now the proprietor of a drive-in theatre, playing movies from sevens years later, using widescreen technology that shouldn't be out a year or two from now. Other than the drive-in, she's also left to take care of her now vegetable mob boss and her sixteen year old daughter Leslie, who is mute and often wanders around the house with a blank daze resembling a cat staring at black space. 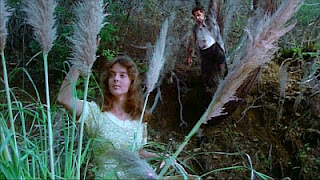 Somewhere in this weird cavalcade comes the weirder turn of events. For some reason, old lover boy decided to make a comeback from the grave and start killing everyone responsible for his grisly demise via gunshot. Yes, I wouldn't bother to beat around the bush trying to disguise the fact that it's the dead lover doing all the cooky supernatural hoohas, which includes not only the killings but the Exorcist-style possession as well. The movie tries to do that, and look where it all ended to.

I can't really decide what Ruby should be; I know it's a proto-slasher, with all the systematic killings done in the very core of the sub-genre itself, from POV shots of the killer, to creative murders, but it never fully touched it. It's as if it really tries to be an Exorcist rip-off, trying to focus on the supernatural possession that's going on with the title character's daughter, but frankly, that game wasn't even played until the last few minutes of the movie, and adding to that, the scene didn't even stood out. 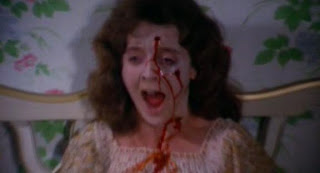 Perhaps the biggest flaw to what made Ruby such drag was, well word-wise, the movie tends to slow down in the most unconventional manner. There's some para-psychology thrown here involving teen angst fueling bullet wound stigmatas and low-budget crab-walks, which is all fair and whatnot, but do we really need to dwell into these if we can have a good fun run with the killings. Sadly, the murders lacked the thrills they should be giving out, being committed either offscreen or cut-offed when the execution is about to be done. In contrary, the film's cast did have their fair roles done right, with Piper Laurie fresh from her costarring role in Carrie (1976), which netted her an Oscar nomination, she did tried her best to make her role memorable. In comparison, however, we can tell Carrie's story of a troubled, supernaturally charged girl is more superior to this dry entry of a spookfest.

Generally, Ruby tries to be spooky, but it lacks the direction to make it anything but. As a slasher, it totally lost all focus and spirals out of control to a rather disappointing finale involving a guilty woman sinking in a swamp with an angry skeleton. For reals.