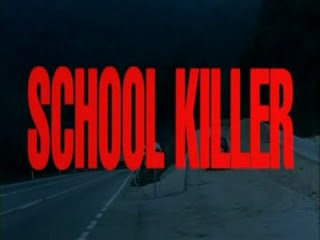 With a title as plain and lazy as School Killer, it could have been two things: it's a diamond in the rough or as plain as a sheet of drawing paper. Luckily, it wasn't as plain as paper.

It's something worse: ambitious.

You know that awful disappointing feeling when what should be a fun movie is butchered by over ambitiousness? Well, this is one of them.

School Killer is about a group of six ghost hunting teens who went inside an abandoned campus trying to snoop around to see the supernatural. Then comes the obvious parts that the school is haunted such as weird people dancing in the buildings, lights that turns on by themselves, a weird and creepy looking security guard appearing now and then, and visions of people slaughtered.

It turns out that some 20 years ago, another group of six teens decided to crash the place and party (ho-hum, again?), but what they didn't know was that there's a deranged night guard lurking around the school, armed with a hunting knife and a fire axe. Now it seems this guy's at it again at the present, as today's set of doomed thespians will soon find out.

As a slasher, it's pretty good. Sadly, it only acted like one around the middle, so before and after that, School Killer plays out more as a ghost flick with kids trying to figure out the reason behind the hauntings, which is very convulsed and jarring. The problem of the movie is that it talks too much; it tries so hard explaining whether the homicidal watchman is alive or dead, and to what really happened at that night, that, in the end, it wouldn't even matter at all. To top all confusion, we even had a Sixth Sense style of twist ending that fails to make this film any better than what an ordinary slasher can offer and instead ruined it.

There's kills, yes, good ones, but those are the ones around the flashback and by the time we got back to the present, these kills had gone tame and lame, as if pushed back to give favor in delivering some spook fest that shouldn't even be happening. With so much talking and boring walk scenes, the only thing that redeems this movie is that apparently the lead killer's played by veteran Spanish genre actor Paul Naschy, known for his werewolf roles during the years 70s and 80s, whose performance as a deranged night guard outshines the annoying teenagers.

I'm probably going all through this the wrong way but dammit, I really hated it when something that should have been so simple had to go through something so complicated just to be executed. Why blast a can open with a shotgun to get the yummy corned beef inside if you could just use the can opener next to you? School Killer did just that. It blown open a big hole that just wouldn't shut up and get killed...

Bodycount:
1 female found slaughtered
1 female repeatedly bludgeoned against bathroom stalls, drowned in toilet
1 male knifed on the neck
1 female knifed on the gut
1 female chest sliced open with knife
1 male decapitated with hatchet
1 male gets a hatchet to the head
1 female falls to her death
1 male found impaled with a pole
2 males and 1 female presumably killed
total: 12
Posted by Kaijinu at 6:04 PM