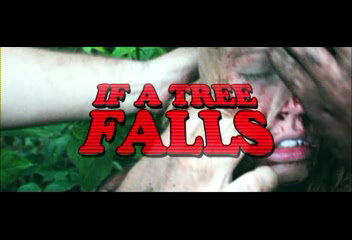 Ever since Tarantino and Rodriguez's Grindhouse (2007) recaptured the drive-in feel, a barrage of horror and thriller films soon follows this trend and, judging from what I'm seeing, only a few managed to do it right with If a Tree Falls being one of them.

After a grueling opening involving a tortured girl forced to walk through a forest blindfolded and then fighting for her life against another victim, we then follow siblings Brad and Lisa Carpenter and their friends Will and Vanessa, on the road for an annual gathering and camping out in the middle of the woods as night falls. It's a slow start, concentrating more on their issues as a family and a group, but it will all descend into madness when morning comes and a gang of masked assailants took a menacing interest on their camp and starts torturing them, seemingly picking off the weak and saving the best for a fate far sinister than death.

Back in the olden days of 70s and 80s horror, Canada is often the hot spot for slasher flicks with classics like Black Christmas (1974) and My Bloody Valentine (1981) hailing all the way from there. If it's not American or Italian, it's definitely Canadian and it's refreshing to see the country still have some punch left.

As an indie film, If a Tree Falls has a few flaws in script and pacing; the first half is far from my taste of a conversation yet it's mature enough to keep the film's serious feel at its best, despite having a B-Movie look. Character development among the cast can get uneven as while the Carpenter siblings have a half-way decent persona, their friends felt more like meat to me with their questionable characteristics.

Thanks to its lush scenery and gritty editing, If a Tree Falls revisits the barren woods with a familiar backwoods slasher situation, only with enough suspense and raw violence that its far from the typical teen-in-peril fiasco. There's enough plotless and pointless violence here to keep it a vile piece and more feel of realism to it compared to the opening half that makes it all horrifying. The ending is a strange one however. I'm not to spoil, but I am going to explain that the ending fully transformed one character and may explain the purpose of, well, everything that happened so far. It's swerves a bit off into exploitation territory but it kinda fits in quite nicely.

It just goes to show that you don't need mass marketing or big Hollywood feel to get a film done right. Just raw directorial power, some decent talent and an idea with a decent execution to it. If a Tree Falls is an acquired taste, but for every fan of exploitation, grindhousse or drive-ins features would see some fair light in this.

Bodycount:
1 male killed offscreen
1 female impaled on garden shears
1 female hacked with axe
1 male stabbed through the back with machete
1 male brained to death with rock
1 female had her face slashed with axe
1 female axed to death
Total: 7
Posted by Kaijinu at 6:02 PM