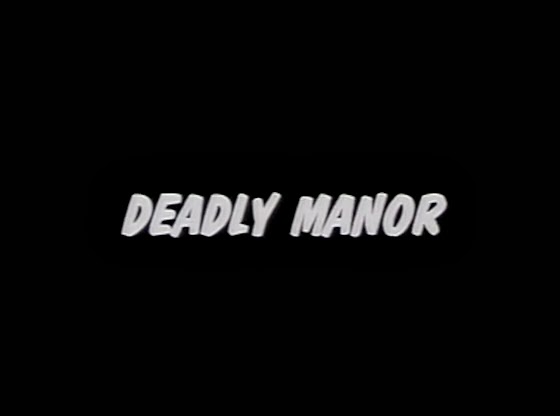 There's a lot of things in life that test my patience: 12 Noon traffic. Dumb and impatient customers at work. Slasher movies from the 80s that takes an hour of padding before getting any action going, which will be made way worse if the copy one happens to get is a direct VHS rip...

Six "teenagers" in a van and motorbike are driving through backwoods country enroute to some lake for the weekend when, after a bit of frustrated discourse and repeatedly looking through maps, it is starting to appear that they got themselves lost. They soon stop to pick up a hitchhiker who confirms that they are indeed off track as he knows the camp they're looking for, however mother nature and lady luck have different plans for them as before they can drive back, heavy rainstorms suddenly sets in.

Luckily for them, there happens to be a remote manor house nearby that appears to abandoned, but borderline-supernatural spookiness are abound as one of the kids feels something evil is living in the there and the mansion's decor (including coffins in the basement, human body parts in pickle jars and a photo album filled with pictures of naked corpses) doesn't help say otherwise. (All it needs is Uncle Fester Addams and viola~!) Still, most of the group decided to camp in the mansion for the night, with the only one gal opposing to the idea of sleeping next to pickled scalps hiking back to the road, only for her to get caught by someone swiftly ending her with an offscreen throat cut.

Eventually (and I use this word questionably), the group starts to die at the leather gloved hands of an assailant who (by the looks of it) is a real stinge when it comes to creativity as most of their kills are offscreen throat slits and knife stabbings. A real disappointment of a payoff for all of the padding this movie did to get this far.

Released in the early 90s when the slasher's Golden age were thought to be done and out, Deadly Manor (1990) looked like it aimed to better itself from being just another backwoods bodycounter by scaling up both sleazy and gothic imagery as much as it could, evident from its use of creaky old candle-lit murder mansion and random sex scenes that may or may not have happened. The film, however, succeeds instead on sliding down as an oddity of unprecedented cheesiness and cliched horror movie dumbness as characters spat out ridiculously hammy lines and does every textbook example of what not to do in a horror film unless you are really asking to be knifed down by a porcelain mask-wearing nutbag.

I have no problems loving bad slasher movies, particularly the cheesy kind like Slaughter High (1986) and Jason X (2001), but what does movie have that Deadly Manor (1990) lacked is momentum, which meant I have to sit through an hour worth of characters just being dumb and cheekily written for the sake of building dreary tension that doesn't work quite well. Granted they threw in a red herring about the hitchhiker having a shady past for effort's sake but most of us can tell that this is an old throwaway that gets resolved rather unceremoniously. Thankfully, the last act rally up well with the villains giving out deranged monologues for both exposition and tongue-n-cheek reasons, as well as cashing in a last minute bloody kill. And, what the hell, why not have the final girl join in the fun and have her try talking some psycho-babble sense into the knife-happy slasher, too? That always worked out.

While Deadly Manor (1990) sought to be an atmospheric and dark psycho-thriller, its undeniable that its dumbness dropped it more than a notch down to shlocky slasher shenanigans. Then again, it has a solid motive behind the killer's insanity and resulting massacre, albeit a challenge to sit and wait for, made the film watchable on a level so its not a total lost. Probably a fair viewing for those with the patience of a god.