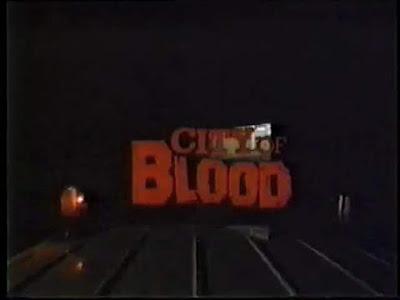 The most exciting part of being a slasher completist is finding rarities, possible hidden gems lost in the midst of mainstream releases and overabundance of cult flick nostalgia and, for most, I indeed get to find and watch genuine diamonds in the rough. City of Blood (1987) is not one of these gem, but I hardly find it fitting to deserve being lost, neither.

Two thousand years ago, a pair of African tribesmen get ambushed by someone hurling a tied rock, braining one of them dead. The other tribesman run for his life and soon stops to drink some water from a fall, only to be snuck up by someone in a tribal mask  who proceeds to beat him on the head with a spiked club.

Fast forward to present day South Africa, where an increasing number of butchered prostitutes have the local police searching for a possible serial killer. Our protagonist, a medical examiner named Joe Henderson, believes there is a more political reason behind the murders after he notices on a crime scene a blood symbol resembling a spiked fist, but his colleagues at the police force is quick to quite him down knowing that any word of this out could catastrophically escalate the issue.

Suffering depression after losing his wife and child, Joe buries his woes working behind the desk until he nearly signed a death certificate with no name on it, which later leads to two agents representing the prime minister visiting him later, urging him to sign it, more or less falsifying a legal document. Intrigued by this and believing this is somewhat connected to the murders going on recently, Joe goes to investigate this shady act on his own, putting himself on the line of fire of not only his country's governing power, but also a murderous masked butcher out on the prowl at night.

Addressing the elephant in the room, City of Blood (1987) is only one small part slasher and barely the bodycounter it wanted you to think that it was. The opening alone would make you think the rest of the movie is going to be a cool hack-a-thon with a homicidal maniac dressed up as an African witch doctor but, truth be told, it's nothing more than a ploy to lead us into watching a political crime thriller involving race wars and forged paper works, only to return to our familiar masked murderer route a bit too late at the end with little to no satisfying conclusion.

Majority of the movie simply focuses on a single man's investigation on a devious government move, which honestly isn't all that bad. The idea of being coerced into approving a sham legal document by the powers that be for the sake of keeping the public under control for the price of one's credibility and morality does spell an interesting thriller, if only the characters involved are more interesting and if the direction has more going on for it than our hero debating on whether he should agree on signing a bogus document, sitting around and talking to people to get their side as he tries to figure out what course of action he should take.

Too much of the movie's time were spent on the casts being one-note players, never going beyond one trait of either being depressed or tired, as well as feeding us the terrors of governing powers through a very muddled plot with a dreary pace and hardly anything exciting happening, simply killing off any means on getting us invested on this movie's approach. A real shame really. The first fifteen minutes or so have us watching our masked tribesmen do brutal slayings and give an effective chase, only for it all to be thrown out in favor of some dull moral drama that surely messed a lot of slasher fans' expectations.

City of Blood (1987) is more or less a feature length political commercial about Black Power groups and corrupt officials, with slasher elements thrown in possibly to make it stand out a bit more. If it was to be handled differently, I'm sure this is a genuine gem of a rare slasher with its unique premise, but for what it is right now, its a boring mess with a bit of an identity crisis but it is watchable if you have the patience for it and/or if you're into something quite odd for your bodycounters.