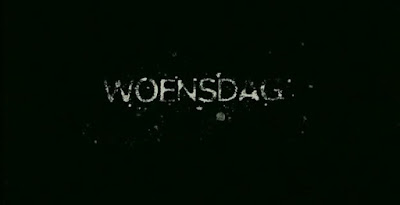 All the way from your Dutch friends in Netherland, this rather simple slasher movie about teens in the woods, a horror-themed reality game show, and the ghost of an evil lumberjack.

Eight teenagers are chosen to participate on a new TV show called Camp Slasher. In it, they have to find clues hidden in the woods to solve the mystery behind the supposed ghost of a vengeful lumberjack skulking around. As the crew busies themselves in filming and the cast drowns themselves with beer, little do they know a real slasher is out prowling the night for victims to murder away.

With a budget of 5000 Euros, Woensdag doesn't hide how cheap it is seeing said gameshow itself is really nothing more than teens staying in a tent while pairs of them take turns being called out to look for clues while avoiding being captured by the lumberjack ghost. It's not very exciting as the novelty (if any) of the game didn't last too long and we are pretty much stuck watching the teens get hammered with booze and the crew doing "crew stuff". (Editing footages and fixing sounds never looked so "normal") Characterization, in this case, is unsurprisingly absent so do not bother establishing yourself with any of the casts as they can be easily replaced with any other partying side characters in a Friday the 13th sequel. 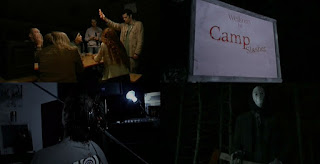 It appears this is all we will be treated with until the 40 minute mark, where it finally shows the movie's first real murders and push the story into action. This is where Woensdag succeeds in a passable manner; keeping an 80s slasher feel, the film has some good practical and make-up effects displayed as our masked killer starts to hack and slash his way through the meat. While some kills and fight scenes were poorly executed and is obviously edited, it is an admirable effort seeing the little money they had to work with and I just love how it kept up with the pace.

As a junkfood equivalent to a better slasher, Woensdag works; there's nothing much to say seeing it is as common as any other celluloid backwoods hack-a-thon out there, masked killer and all, but it can be a worthwhile time-waster. If you do get the chance to see it, I wouldn't recommend hyping for it too much.