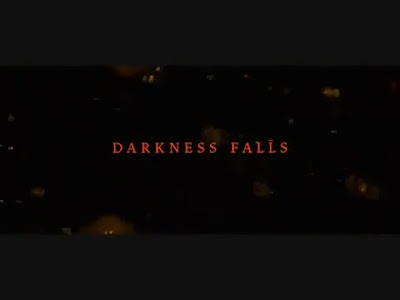 Horror films these days usually end up being formulaic rehashes or overblown torture shows that can get a tad tiring at times, so when Darkness Falls opted to go back to simpler roots, to the very essence of horror itself, it wasn't surprising that it came through with critical eyes and tilted heads.

The movie starts with a narration of what happened in the1800s, concerning one Matilda Dixon, a kind elderly woman nicknamed "The Toothfairy" for her reputation of giving gold coins to children who hand her their baby teeth. But after a house fire scarred her beyond recognition, she continued living as a recluse, only going out at night with a porcelain mask over her face. One day, two children didn't came home and all the blame went to Dixon, riling up a crowd into hanging her only to later discover the children were just lost. The town goes silent since for the crime they committed, not knowing how dire the consequences will come...

Fast forward to some time in the 90s, a young boy named Kyle just lost his last baby tooth. He's warned once by his friend Caitlin to try not looking at the fabled tooth fairy as she visits him for his tooth. However, later that night, Kyle unexpectedly wakes up and locks eyes with the ghost of Matilda. Now fueled with rage, the wraith attacks, killing his mother and forcing him to take refuge at a well-lit room overnight, psychologically scarring him to fear the dark.

Further forwarding twelve years later, Caitlin, now an adult, is worried about her younger brother who's starting to act strange towards the dark, just like Kyle did when he was just a boy. Feeling he might help, Caitlin contacts Kyle who, after all of these years, is still obsessing over at what happened the night he lost his mother. Caitlin never knew how much of a help Kyle would be as things, of course, turn out for the worse when it turns out Matilda has returned to Darkness Falls to slaughter again.

If Darkness Falls would prove anything, it's that we all know our horror. The film barely touched anything to hype itself up as gore is absent, some scare factors felt underwhelming and there's a lack of T&A. Instead, the movie treats us with a lot of offscreen kills and a few decent looking imagery, which would have been fine if the ending product didn't feel like it could have done more. With a fine opening and a fairly fantastic origin for its main monster, I was really hoping the movie would follow it up with more scares and/or gruesome monster attacks, but Darkness Falls would rather play it safe by tackling very familiar "monster movie" tropes mixed with a hint of "supernatural" horror and some inconsistencies. (Most notable being the fact that the Tooth Fairy is supposed to be very sensitive to light. She scurries away violently even from a tiny flash of a torchlight, yet she moves fluidly around a lightning storm, unaffected.)

Darkness Falls isn't all bad to be honest. The Matilda creature is an awesome villainess, being pure rage and uncontrollable mayhem incarnate that frankly deserves a better movie. As a basic example of a supernatural slasher monster with a lot of potential, her scenes are the most fun parts of the film, even if her killings are a tad dry on the blood and bodycount department. There's also some decent cheesed-up acting from the main casts, booted with a fairly good and often cheeky script and a production value that looks pretty cool at times. (Not to mention that awesome ending song played at the end!)

I believe the best way to go about this popcorn muncher of a slasher-creature feature is not to expect too much. Darkness Falls (2003) an underrated movie for a lot of good reason, but still a fair attempt to create a "basic" horror film.