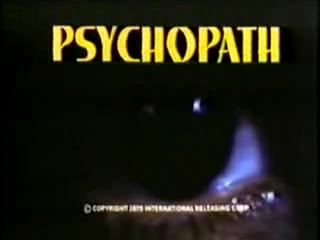 A rarely seen and awfully obscure proto-slasher,  The Psychopath centers around one Mr. Rabbie, an inept man-child puppeteer and kid show host who stalks abusive parents and murdering them to avenge their children. After snuffing out a suburban couple who got away with man-slaughter after paddling their son too much, Mr. Rabbie's killing spree caught the attention of one Lt. Hayes, who's starting to see the connections between all of these seemingly random slayings, all the while investigating a missing child case. Will Hayes find his killer, or will Mr. Rabbie be triumphant with his mission to avenge battered children?

For what its worth, the film has an interesting concept playing around as the idea of a murderous avenger of abused kids does sound like a very worthy slasher film to tackle, touching quite a sensitive material and twisting it in a way that it could cater to the bodycounting audience. However, the seriousness of this matter often loses its edge thanks to the overall hammy acting and some ineffective directions, which makes some tugging scenes like that of a hospital visit where a nurse explains to Lt. Hayes how a traumatized child can be beaten into submission seem uneven with the cheesy tone. Any scene of child abuse is mostly done offscreen and the adults committing them act so much like pathetic arses that it's near parodic, making it a tad too obvious that the director wanted us to root for these people's demises.

And on that note, Tom Basham as the titular psychopath leads out a performance that ranges from innocent, weird and creepy, but overall a little hilarious given the way he react or depicts his character's man-child behavior. (Check out that "Chocolate Cake" reaction) Moving with a steady pace, the movie eventually gets around to his killings after a thirty or forty minute run which, though a little dry, can be impactful considering how deserving most of the victims are. My only complain about the killings is that Mr. Rabbie could at least made a clear point to his victims why he's doing this to them, make a good eye opener for their mistakes and make them realize it all could be avoided if they hadn't abused their children. But we all can't win it all so I guess running a woman's head over with a lawnmower after towel snapping her unconscious will have to do for now.

It's a silly romp, but The Psychopath is an easy run for a slasher movie; weirdly atmospheric, with an unholy alliance of mean-spirit and biodegradable cheese on a plot that, if worked right, would have given a lot of punch. Now, if only a certain Joe Spinell hadn't passed away in 1989, we could have seen this movie get an unofficial remake under Mr. Robbie: Maniac 2...