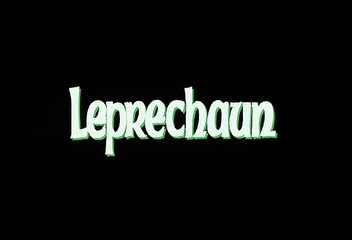 One part slasher movie, one-part monster flick, this cult-fave can be best remembered as Jennifer Aniston's post-FRIENDS entertainment number ala debut film. Now, I'm a big fan of FRIENDS; I actually watched it every night the moment I found out about it in High School and seeing Aniston outside her Rachel Greene character in this low-budget, super-camp horror flick is a mixed bag for me. But, as they say, they could at least start small and what can be smaller than the miniscule budget indie Leprechaun?! (insert rim-shot here)

Ten years ago, an evil leprechaun (playfully played by Warwick Davis) follows home one Dan O'Grady after the man took his gold and, after killing Dan's wife, threatens to end him unless he returns it. Unbeknownst to the Leprechaun, O'Grady knew the creature's weakness and has armed himself with a four-leafed clover to render the Leprechaun powerless before trapping him inside a box. Cut into the present and O'Grady's son JD, along with JD's daughter Tory Redding (Jennifer Aniston), decided to move in to the old house in hopes of restoring it. Although Tory isn't all too excited with all this and is more eager to move back to the city, she eventually decided to stay after she finds out their hunky neighbor Nathan will be helping them renovate the house.With Nathan are his friends, the mentally handicapped Ozzie and his younger brother Alex, who are there to give a hand on the chores and, as luck would have it, an escapade to the basement accidentally releases the trapped Leprechaun after it tricked Ozzie into setting him free.

Now hunting his gold and those responsible for taking it, the Leprechaun eventually sets his sights on Tory and the gang knowing one of them has the rest of his beloved treasure and he's not shy on ripping a few faces off to get back what belongs to him.

While not exactly the best in the series, Leprechaun is a horror-comedy with much intended bad cheese flushed into it, counting it off as a fun bad flick to watch and enjoy at a rainy day or as a late night popcorn munchie. The kills are low in count but splatters enough blood to cake them mauled flesh and torn ears, accompanied with B-movie scares that are cheap but effective at some angle. The Leprechaun himself boasts some fair looking make-up work and a personality modeled after Freddy's bad habit of one-liners (done in rhymes!), thanks to a memorable performance by Warwick Davis who would later play the evil dwarf with much joy and maliciousness in five sequels.

Now, this may be subject to personal taste, but some bad notes include slasher convention being followed too religiously that some of the action hardly seems shocking or all that scary. The stalk and chase antics are too sugar-coated with camp and the indestructible nature of the Leprechaun does hint to be scary, but he's too silly and cartoonish to be anything but horrifying. Yes, he looks scary, but his playful nature influences the tone of the film and any attempts to be serious and tense (there's a bit here) comes off awkward. And how could it not if we got the Leprechaun here  riding tricycles, scooters, and a toy cars to give chase, run around like a toddler, and clean shoes even if means letting his victims escape? If you find these scenes as scary, then yer the kind of guy/gal who probably be freaked out by a dancing lunch box. (Then again, said Leprechaun had the face of a 600 year old grampa. I forgot to throw that into the equation...)

So as my final verdict on this favorably funny bad flick: watch if interested in tiny monsters, little people in costumes, see Jennifer run around being chased by said little person and don't give a crap about logic. It's camp and horror fused together, that those swimming in beer, or had a good (or fair) sense of humor would enjoy both alone or with friends. Silliness, gore and seeing Jennifer Aniston fight a demonic dwarf maybe all the best reason to watch this.

bodycount:
1 female falls down the stairs, broke her back
1 male had his chest crushed with a pogostick
1 male got his face mauled to ribbons, neck broken
1 male found mauled, bled to death from injuries
total: 4