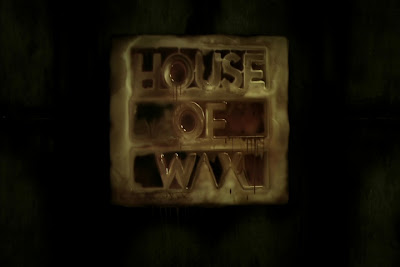 Known famously among horror fans as the movie where Paris Hilton dies, House of Wax (2005) is far from being the implied "remake" of the classic Vincent Price proto-slasher mystery and more of the usual teen slasher fare. Of course, knowing me, that is a Godsend.

Starting with a scene in 1971, a pair of children is seen at a breakfast table wherein one's being restrained in a cuffed high chair by his parents for acting ferociously while his brother nonchalantly eats his cereal.

Skipping to the present, friends Carly Jones (Elisha Cuthbert) and Paige (Paris Hilton), along with their respective boyfriends Wade (Jared Padalecki) and Blake (Robert Ri'chard), and Carly's trouble-making brother Nick (Chad Michael Murray) and his best bud Dalton (Jon Abrahams) are on a road trip to see the last football game of the season, which soon turns into a camp out later that night. As it would in your slasher movies, the group then gets harassed by a blaring pick-up truck that seemingly came out of nowhere, but it soon drives off after Nick retaliates and broke one of its headlights, an act that may or may not led to one of their own cars getting sabotaged and some of their belongings stolen.

Now in need of a new fan belt, Blake and Carly decided to split from the rest after finding out there's a gas station nearby in a town called Ambrose, hoping to simply catch up once they get their car rolling. The town, however, turns out to be almost desolate, but after accidentally disrupting a funeral, they meet Bo, a mechanic who agrees to look for a fan belt to help them out, although in an increasingly suspicious manner the longer the pair stay.

Things get weirder when, after deciding to visit the town's prized House of Wax, Carly sees a ghostly prowler sneaking around the house. It all soon becomes clear that someone's living under the titular house, someone with a habit of killing and turning people into wax mannequins...

In its run, House of Wax (2005) certainly does it best to keep a straight face as a slasher with more than one occasion ringing back to the Golden years of the 80s; it's as intense as it is gruesome, with some likable characters despite some being singular-minded meat, dragging along a pretty cool set of killers with a modus operandi that, though silly, is executed effectively thanks to some really nice CG and practical effects. In turn, a lot of the the main culprits that make the slasher sub-genre memorably cliched are present to a tee, including the gang splitting up in search of their missing friends, half of them having sex instead of helping yet almost all of them fated for very gruesome deaths. Not that I'm complaining (much), but the only thing I find a little weird was it's lengthy running time. I don't know whether it was the torture scenes that prolonged it, or was it the stalkings, or the kids snooping around inside the goons' lair, but frankly I don't really care much coz these scene are hardly boring. Surprisingly.

The climax of the movie where the House of Wax (which is literal in nature) catches fire and starts to melt has to be one of my personal fave scenes among my slasher titles. The special effects used were awesome even if some of the bits do look obviously CGed as it's a great tension builder considering the whole thing's about to collapse on top of our final leads, with a (visually hellish) scorching wax pit at the bottom to add.

House of Wax (2005) may not be the apple of most critics' eyes but hey, it's not everyday we actually get a brother-sister final leads at the end and it's certainly isn't everyday we get to see a half-way decent slasher flick from a big shot studio without utterly making a complete mess out of it. Everything from its score to the mood have me accepting House of Wax (2005) as, again, a Godsend in a year where slasher horror seems to be awfully generic. It's a little bit of proof that the sub-genre can still shock and entertain us.

Bodycount:
1 male coated in wax, later dies from shock after his cheek got sliced off
1 male decapitated with daggers
1 male gets a hunting knife kicked into his neck
1 female gets a steel pipe thrown through her head
1 male bludgeoned to death with baseball bat
1 male stabbed on the chest with a hunting knife, falls to his death
*A number of people also gets revealed to be coated in wax and posed as mannequins through out the film. Quite memorable among them are the ones shown through melting wax.
Total: 6+
Posted by Kaijinu at 4:24 PM