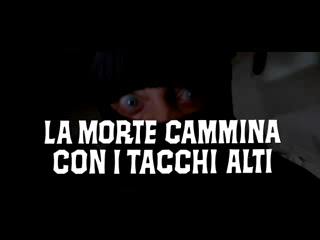 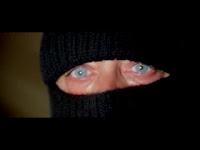 A train roaring through the night and a man with a gun; these are the first two things we see in this "giallo" as an assassin with piercing blue eyes, wearing a balaclava helmet, suddenly arrives and knifes the gun man's neck. Cut to Paris; Nicole, a dancer, is being interviewed with her boyfriend, Michelle, by the Chief Commissioner about the murdered man, which turns out to be an international jewel thief AND Nicole’s father. The Commissioner is hoping Ms. Nicole would cooperate, but she, in turn, shows little concern over her father's demise or any about some stolen diamonds. 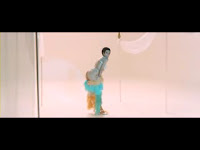 However, it’s not long before someone begins threatening her, voice-box disguising their voice and attacking her one night as the same blue-eyed man breaks into her apartment, razor pressed against her. Surviving the attack, Nicole opted to stay with Michelle for comfort, but after finding blue contacts in his medicine cupboard, she fears he might be the killer. She runs to Dr Matthews, a man she befriended during one gig as an exotic dancer and urges him to take her to England to escape her assailant. The pair wastes no time enjoying their time there and Matthews finds his friend an isolated seaside cottage to relax in. Until, that is, the figure in the black balaclava somehow followed them and he's running out of patience. 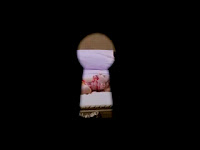 While the title is eargasm for my craving for a good giallo title, Death Walks on High Heels is hardly one. It's a "giallo-hybrid" of sorts, mixing hard-boiled heist thrillers with the sensitivity of a fancied murder-mystery. As any giallo title out there would, the film took its time leading us from one red herring to another, and provided enough plot twists to leave any suspicions astray. It's pretty flair, but by the time the attacker finds his/her way to England, the film slows down and slugs its way further to more twists, a direction that got me disappointed to what was an attention grabbing opening. 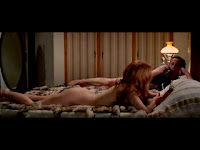 It's not all that bad, however; the story still brought some spark of cleverness and the production looks well-handled, but I like my giallo to be pure murder mystery and less jewel heist. It's not a horrible idea per se, just not my taste. But watching this, I do understand that not all giallo would be following the kill counting formula as religiously as most slasher titles would anyways. The convoluted narrative is reasonably gripping despite being uber slow and offers a number of plot twists along the way to keep any giallo enthusiasts happy.

Not the best giallo I know, but at least I'm glad that I get to see it.