White bread versus Red Meat: The Hills Have Eyes (1977) 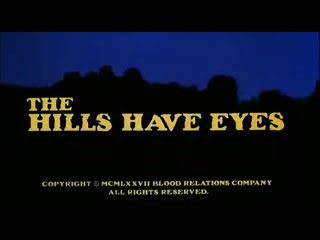 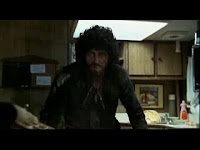 The Carter family was driving across the desert on their way to California when they ran low on gas and stop for directions; they got their help from a lonesome gas attendant who warned them not to stray off from the main road, as the family originally planned to use a detour to check up on a silver mine parents Bob and Ethel Carter received as a wedding present. 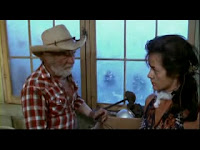 As things went on smoothly towards the dirt road, until a sudden swooping plane startled the white-bread family and skids off the road, trying to avoid hitting a (Lord help me on this) a rabbit. Now with their wagon crashed, leaving them stranding in the middle of the hot desert, Big Bob and his son-in-law Doug left to go back to the station to get help, while the rest of the clan stay behind. Unfortunately, little do they know what lives within those hills: the gas attendant's cannibal son, Jupiter.Dwelling the desert with his own family of deranged man-eaters,they siege the Carter clan, killing three and kidnapping Doug and Lynne's baby. In desperation to survive the night, the Carters, or what remains of them, had a choice: kill or be killed. 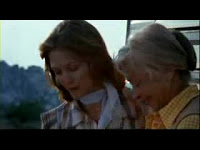 Staying true to its exploitative nature, The Hills have Eyes puts a good use to the desert as it does on scaring people. What is terrifying here is that it explores on the Hitchcockian theme of ordinary folks pushed through unordinary scenarios, often to test their morality and blurring the line between good and evil. The Carters are indeed the victims, but as their numbers began to thin down, they had no choice but to kill these monsters off before they kill them as well as save their youngest member.

That being said, The Hills Have Eyes is brutal for its time as innocent family members gets shot, burned alive and even raped by the cannibals, only for them to get even and exact the same brutal vengeance against their attackers, though more justified on their end. Still, this did not stop director Wes Craven deliver a sense of dread and intensity not only coming from the maniacs, but of what the Carters become after all of their tribulations. 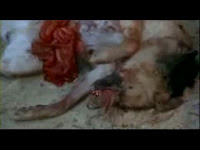 The movie is a solid classic for the exploitation/survival sub-genre, though though some may feel that the villains here are a bit outdated and would fail to make an impact. Personally, I might say this because I saw the remake first, but the cannibals here looked more silly than scary; they're war-painted, wearing collars of animal bones, talks in perfect English and even say amusing lines like 'I thought I heard rocks falling or something'- 'You got rocks in your head, asshole! Keep walking!" Still, as funny as they look, they thankfully still show a level of intimidation as they show to be smart enough to plan their attacks with a high rate of success. They talk and reason, being just as close and almost as civilized as the families they pick on, the one element that made this movie special which Aja missed in his remake, sadly discarded for the sake of gore. 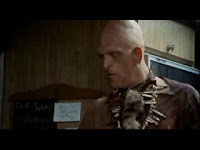 It's impressive how this movie had gathered so many fans for 40 years now, it just proves that some classics are just hard to beat. In fact I admire Alexander Aja's attempt to mimic the same dread this film had and out-done it (for some), but, to show some respect, I would rather see the remake as an equal footing to this solid, creepy chiller. The Hills Have Eyes is a film horror fans of all kind should see, and own, at least once in their life. I myself am so glad I did for once...

bodycount:
1 dog disemboweled
1 male beaten on the head and impaled by the neck with crowbar
1 male crucified to a tree and set ablaze
1 female shot on the chest
1 female repeatedly shot to death
1 male pushed off a cliff by a dog, falls to his death
1 male hatchet hacked to the back, repeatedly shot
1 male had a rattlesnake bite him on the back, knifed to death
total:8
Posted by Kaijinu at 8:25 PM