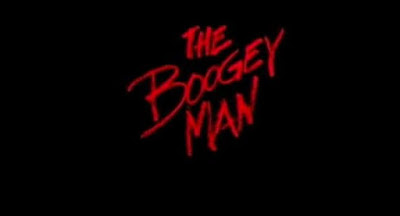 I remember seeing this all the way back at 2011 and hating it. Hating it for the uninteresting atmosphere. Hating it for the choking amount of cheese. Hating it for being so uneven. But as time flies, my taste differs and I learned that even some terrible films can get better over repeated viewing. Will I say the same for Ulli Lommel's The Boogeyman? Let's see.

The film opens with two siblings spying on their mother and her lover making out, something the two grownups doesn't appreciate and decided to discipline one of them, Willy, by tying him up to his bed and smack him up a bit. His sister, Lacey, gets the less severe punishment of being sent to her room, but not before getting a glimpse of her brother being abused; helping him out later that night, Lacy cuts Willy free with a knife, the very same knife Willy soon uses to get revenge on his abuser by stabbing him to death once he's asleep.

Moving forward a some years later, we now see Willy (Nicholas Love) and Lacey (Suzanna Love), living a mostly normal life. I say "mostly" as Willy became mute and Lacey, now a wife and a mother, is currently being persuaded by her husband to speak to her psychiatrist Dr. Warren  (John Carradine) about the nightmares she having about "the night". Things escalate when Lacey finds a letter from their dying mother which Willy have been keeping from her; wanting closure, she decided to visit her childhood home with her partner in hopes of meeting her possibly still-living mother, but instead finds it occupied by a new family and that their old mirror is possibly haunted by the ghost of the dead boyfriend. Freaked out by the ghostly sight, Lacey resorted to smashing the mirror, unknowingly releasing a powerful evil that curses each individual shards. An evil so powerful that it can MURDER anyone who grabs a shard...or goes near it...or gets possessed by it..or something.﻿﻿﻿﻿﻿

Watching The Boogeyman is like an acid trip. From time to time, it dozes off as a narrative of weirdly proportions, terrible pacing and dodgy editing, sugarcoated with some decent deaths. Some of said weirdness do come out rather entertaining in a "B-flick" way, but it also destroys any potential creepiness and consistency from of the film's ideas, making the entire run more of a stir-fried pasta made up of other horror films like The Amityville Horror, A Bay of Blood, Halloween, and even The Exorcist. You want unnecessary red herrings scenes that didn't make any sense to begin with? You got it! You want random teenagers that aren't essential to the plot and are instead in for the kill count? You got it! You want furniture flying around and attacking people ala Carrie? You got it! Killer window panes? You got it. You want Linda Blair demonic possession? You got it!

You can honestly tell from this that the movie's just pulling out cliches upon cliches of bad cheese and horror tropes that, frankly, can be a little over-ambitious but otherwise watchable on a level. It definitely a mess for a whole lot of people but makes something entirely unique for a slasher movie and if one can move past the laughable dialogue, low budget effects, and lack of any present humor to lighten up things especially if one or two moments should (Like that random Exorcist-esque moment during a psychiatric visit. Now this was before we even get to the part of evil mirrors, so what the heck was that about?!), The Boogeyman can be a gourmet cheese of horror entertainment that did use and twists some neat concepts based on mirrors and old wives tales.

I cannot say that this is a great slasher flick by a stretch as there are other better supernatural hodge-podge slashers out there like Superstition (1982) and Terror (1978), but for what was attempted here in The Boogeyman, it's a trial I am willing to sit through should I ever be in the mood for low-budget bodycounters that involves killer objects. Not for everybody but it is what it is and some people are bound to appreciate it even more than I did.

bodycount:
1 male knifed to death
1 female had her throat stabbed and cut with a pair of scissors
1 boy had his neck crushed by  window pane
1 female had her head whacked by medicine cabinet door (no, really...)
1 male gets a floating skewer impaled through his head
1 female pushed mouth first into a skewer, impaled
1 male found pinned by the neck to the wall with a pitchfork
1 female found strangled by water hose
1 male stabbed to death by flying knives
Total: 9
Posted by Kaijinu at 6:37 PM