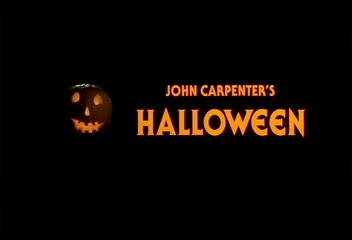 
"Black Cats and Goblins and Broomsticks and ghosts
Covens of witches with all of their hosts
You may think they scare me
you're probably right
Black cats and Goblins, in Halloween night"
TRICK OR TREAT!

What else should I say about "The Night he came home"? Every horror enthusiasts can safely say that this is one of the best, finest, most unbeatable piece of film there is. While I did saw this film late in my life (Friday the 13th and its kin beating it as the first slasher films I get to watch), I am still overwhelmed by this film's original staple nature and surprisingly scary attributes, respected it for the "deeds" it has done (unintentionally) in the name of horror. Halloween is no longer just a "cult classic". It is a classic and no other title out there (or "remake", if that's what you call it, Rob) can outdo the damage this film created for the world and the billions and billions of titles made in its name.

Though no way the FIRST slasher film (Psycho (1960), Texas Chainsaw Massacre (1974), Black Christmas (1974), Alice Sweet, Alice (1976), you pick which one), it is the "messiah" of the sub-genre, bringing bodycount horror into mainstream and rises it to popularity that nearly took over the 80s and continues to do so until today. Yes, it is that reason why I feel honored seeing it and it is that reason why I feel a little uneasy reviewing this.(and who doesn't? It's like having superpowers and knowing you can't go willie-nillie using it every time...)

So let's get started!

In 1963, at Haddonfield, Illinois, a masked assailant breaks into the house of 15 year old Judith Myers, stabbing her to death with a kitchen knife before stepping out of the front door just as a parking car stops in front of them. We now see a young Micheal Myers, dressed in a clown-suit, knife at hand, staring blankly at the night as his parents takes off his mask and watches in horror at what he had done.

Fifteen years institutionalized, his psychiatrist, Dr. Samuel Loomis, drives to Smiths Grove to check up on Myers who has devolved into a state of catanoia, refusing to speak or move from where he is. Loomis sees the evil in Myer's eyes, the Devil's eyes as he calls them, and he fears of the brewing darkness inside him might spark anytime. But that one night in 1978, much to Loomis' surprise, Myers moved, causing a situation to distract Loomis and his assistant before attacking his car and escaping with it. Now loose, Micheal Myers, The Shape, is free once again, returning to Haddonfield to continue his spree.

The next day, on Halloween, as friends Laurie Strode, Annie Bracket and Lynda Van Der Klok prepare their Halloween plans, Loomis arrives to warn Sheriff Bracket that Myers returned home, who is now, unknowingly to the whole town, stalking the three girls, studying their every move. The girls, in every encounter they have with Myers, dismisses him as just a minor nuisance, possibly just a stalker or a pervert out in Halloween.

That evening, sees herself Laurie stuck babysitting a local boy named Tommy Doyle, while Annie is also tasked to babysit young Lindsey Wallace. While Laurie remains loyal to her babysitting gig, Annie and Lynda find a way to get their freaks on with their dates, with Annie leaving Lindsey to Laurie's care.

All the while, Dr. Loomis and Sheriff Bracket search the town for their loon, with Loomis staying behind in the old Myer's place in case he returns there. However, Myers opted to go after Laurie's friends instead, first murdering Annie and then stalking Lynda, killing her boyfriend first before strangling her to death whilst talking over the phone to Laurie, gasps of air overheard. As Michael now moves to his last target, Laurie investigates the fate of her friends and finds, instead, their dead bodies stuffed in one small space, and their assailant hiding in the shadows...

Halloween is all about simplicity. No twists. No complexities. Just a story about a lunatic, silent yet deadly, stalking a trio of girls upon his escape. The movie never bother grasping the killer's origin as director John Carpenter never bothered explaining on the screen what really went on inside Micheal's mind when he killed his sister, leaving to our imagination to ponder upon what might have caused Micheal's sudden murder spree. All that is certain is that he was and still is a monster; a motiveless, murdering monster, whose victims might could have been anyone. In fact, Micheal would also have been any loon out there. He's a staple spree killer in the living flesh, with no known superhuman treatment until the last scene of the movie, where Loomis might have been right on calling Micheal "Evil" incarnate; senseless evil whose white mask reflects his seemingly clear mind, bent only in murdering those around him. There are no targets, there are no reason, just death.

The rules of the slasher genre all befits this title like a glove, as Halloween provided the staples of very elements of every slasher film made. The idea of "sex means death"  gets thrown here with the three female victims either had sex or was about to, finished off with the swift cut of a knife. It shows the idea of "distraction" caused by the act, though natural, may also leave you vulnerable to the dangers outside. But it doesn't necessarily mean punishment, but rather warning of choice without the sense being a moralizing piece of cinema. In that sense, Halloween figures a way to show a relationship between the monster and the surviver that becomes a classic element to the slasher sub-genre; Laurie is a virgin and a challenge, Micheal is a maniac and a threat, they're both outcasts, but in contrast of choice and nature, hence a more edgier reaction to another, good and evil, light and dark.

Interestingly, Halloween's cast of characters, as one-sided as they are, are believable, a trait rarely nailed right by its kin; while the movie focuses more on Laurie and her friends, the film is littered with other casts that fairly reflects any suburban home, characters that are realistic in the sense that you know these people can exist in your neighborhood for real. Jamie Lee Curtis played our most well-known virginial final girl Laurie Strode, whose friendly, clean-cut character made her a perfect target for a killer's obsession. Isolation is played around with the fact that the streets, though littered with children, provided no immediate help, no adults to call for in case of trouble, no body to seek to by the time the boogeyman appears. It later toyed with the idea of self-reliance as The Boogeyman becomes all too real and its up to Laurie's wits to save herself and the children in her care.

However, its a sad fact that this nearly type-casted Curtis into more roles in horror films before shooting off into Sunstreet Boulevard of caviar and fashion designer-friendly shoes. But what was more interesting is our "Ahab", Dr. Samuel Loomis. Donald Pleasence plays a disturbed psychiatrist, Dr. Loomis is no ordinary man of science; he no longer sees his patient "human", calling him a "devil", "evil", even "death", almost as irrational as the force he's trying to pursue, rambling about how dark this man is and how dangerous he is once he escaped. Perhaps in all of those years treating him, Loomis' belief in science have been countered by the "Devil" he is seeing, he found "no rhyme, no reason, no motive-just fear", which may have succumb him to accept evil and sees it as his duty to keep "it" (Micheal) in. Thus, the birth of a modern "Ahab".

Halloween is a work of love for a independent film, with stunningly clear and simple visuals, a score that dictates the presence of danger, vital to the atmosphere and mood of the film (Inspired by Goblin's Deep Red theme, composed and performed by John carpenter himself. "If ya want something right, ya better do it yerself" as they say) and a box office success of $47 million domestically and about $60 million worldwide. An obvious success of a classic, it was made, then and there, sure that The Boogeyman will not be silenced forever...

P.S.
I do have one complain about this film, though. Why do the sequels bother hiding Micheal's face is we already got a clear look of it in here? I just don't get it...
Posted by Kaijinu at 4:59 PM