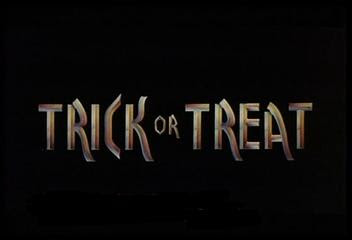 In the slasher-verse, whenever heavy metal and hacking go side-by-side, it's mostly tacky and overly cheesy. The likes of Rocktober Blood and Terror on Tour certainly show how hard it is to make a good Rocking Slash-a-thon but at times they do succeed on being at least fun. Rockin' into the scene is none other than one overlooked "Heavy Metal horror" Trick or Treat, a movie far from a bonafide slasher but a delightful watch for any open horror fans!

Eddie is your typical 80s headbanger but with a little more brains ticking lively in his head. Being a rocker in his decade prones him to the usual bullying problems and humiliation, but so long as Eddie has his rock music, he's okay with that...

that is until he finds out his favorite rocker, Sammie Curr, mysteriously dies in a motel fire.

Devastated, he turns to his buddy Nuke, an equally music fascinated wannabe DJ, who out of pity gives Eddie the last known record of Sammie Curr. After further humiliation from the local jocks one day, Eddie plays the record to relieve him of his woes and finds out the the vinyl is Sammie's last connection to the mortal realm from beyond the grave, speaking to Eddie by backmasking the record. Eddie also learns that by recording the music from the tape, he can unleash Sammie's force into the real world and plots on using it against those who humiliated him. But when one girl got killed in the process, Eddie realizes that he may have gone too far and plans to dispose the record.

That is unless Sammie himself had anything to say about it, now powerful enough to walk on the realm of the living (again) as an electric boogeyman of hard rock and hellbent on playing for Halloween night to kill everyone in the town.

Obviously a play on the familiar Carrie (1976) plot, wherein a young bullied teen gets supernatural powers and plans on using it to punish, Trick Or Treat is among of the many titles that special effects and gore in favor of focusing on the bullied hero, wonderfully played by Mark Price as his character transitions from a geeked tempted with power to an unlikely savior as he finds ways to come in terms that things are not always better when harm is involved, especially that from an electrical Satanist rocker!

Interestingly, the film can be regarded as a satire to the senseless and tired attacks on  rock and roll by "televangelists", claiming it to be the "Devil's Music" back in the 80s, evident on the plot as it involves familiar tropes such as hidden messaging, demons coming from video cassettes and a supernatural boogeyman with electrical powers, familiar with Horace Pinker's of Shocker (1989). This being said, Trick or Treats even boasts a fair number of cameos of rock and roll legends of that time, like KIZZ's Gene Simmons as the hero's DJ friend Nuke, and a quick cameo of Ozzy Osbourne as a televangelist. Sammie Curr (played by Tony Fields, who later spent his acting career on television), as a devil-worshiping rock star who may have sold his soul to the devil for supernatural powers, even resembles rock legend Alice Cooper down to the black leather and chain get-up.

The movie is cheesy enough to be fun, cleverly paced and directed to be even funnier at times as it takes influence from one sub-genre to the next, which includes Satanism flicks and a bit of teen slasher. Henceforth, Trick or Treat is not a horror film people should take seriously, nor is it a political propaganda disguised as a movie despite a few nods. With all that funny script and outrageous silliness, I could say that this is one movie that also focuses on making us feel good and have a great time. The only drawback to this, though, is that like many cheesy horror, the mediocrity may get the better of this movie and its target audiences as it lacks any solid scares and it has some rather tame kills despite the plot jumping from a supernatural horror to a sort-of slasher at the last third of the run.We hardly have any background on our killer aside that he is demonic and a rock star, plus for a movie that deals with heavy metal, it's not as chaotic or dark as it should be.
Aside from these minor flaws, the film is enjoyable enough on its own. What it lacks in scares and gore, as I mentioned, Trick of Treat makes up for it with a strong story and some decent characters that's definitely root-worthy! Its another take on the "avenging nerd with powers" theme, but at least its more upbeat and lively than any of the similar tropes, as well as a unique entry to the Rock'nRoll Horrors.  Try it, Live it, Rock it!