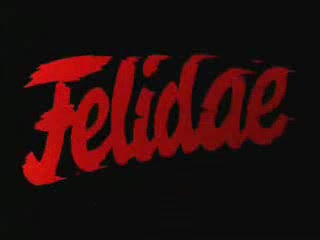 I really hate it when people say cartoons are kids stuff; its these kind of people who're too accustomed to their lives as grown-ups, losing their childhood in favor for reputation, money and position. Fortunately, in this day and age, animation had broaden out its audience from children to the child at-heart and even to the mature-minded themselves.

Felidae is one of these animations that targets the latter, a dark noir done away at the boom of animated films in the 90s, with a rarely explored point of view of murder, paranoia and deadly secrets.

The film centers on Francis, a new cat in town moving in with his owner. He quickly gets involved in a recent string of murders after he made a "friend" named Blaubart, a little foul mouthed, yet street-wised and responsible cat, who was there snooping around to see a dead feline which he assumed to be killed off by a "can opener" (humans for cat lingo). Francis, however, can tell otherwise...

As Francis tries his best to fit in a new neighborhood with his friend, things began to take turn for the worse. He encounters a group of bullying street cats, as well as a cult of cats worshiping Claudandus, a cat rumored to have suffered in the hand of can openers, turned into a messiah figure for his sacrifice and bravery against the abuses he endured. Little did Francis know that, through a series of blind luck and more murders, he's getting closer to the identity of the murderer, putting himself in a position of being the killer's next target...

Felidae is no way a child's viewing; it has the making of every neo-noir thrillers out there, including some rather nasty murders (most of them offscreen, but otherwise too extreme of an image for little kids), religious connotations, suicides, scary scenarios (Francis' dreams often involves abuse and mutilations), some sexual situations and slang (yes, cat sex and gay troping) and a graphic animal cruelty videos showing a scientist's experiment of genetic enhancement. You can hardly pass this as a safe family viewing even if you cut the gore (and sex) scenes out since the film had this heavy, "drowning" feeling that literally sucks out your very emotions for these animals. Beneath its inked and penciled images, is a dark thriller that only true adults would come to appreciate. (if only they loosen up and accept its artistic approach of a film)

The animation is fluid and beautiful, powerfully detailed at times, befitting the movie's story and the seriousness of its tone. Its dark, sullen, and a little downbeaten, making the film's eeriness workable. Voice acting is well handled, although I can't say the same for those who got hold of the english dubbed version; the VA there could get a little off at times, but otherwise still watchable.

Whether you count it as art, or just a piece of film, Felidae is a rare example of a unique thriller. A nice approach to the genre, good enough to rival those moral-conscious, family-friendly fellas in the "Disneyland" industries in terms of animation and impact. Its a nice title to watch in a rainy day, so warm up some popcorn and pop it in, and let Felidae take you where no horror enthusiasts had gone to yet.