Well, just when you think he got it, he lose grip and let it fall down into obscurity hell; Ryan Nicholson’s 2010 attempt, “Star Vehicle” (or “Bleading Lady”) promises to be just as retro as his best effort “Gutterballs (2008)”, but fails to deliver on direction and execution, all in the meantime still spewing some pretty neat gore. 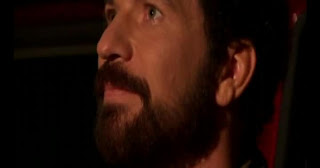 Star Vehicle tells the story of one Donald Cardini, limo driver and self-proclaimed movie buff with a short temper. Now, he works for a group of B-movie stars on a filming of an equally cheesy and low-budget slasher flick, keeping his rage in check as much as possible, as there’s someone in the cast that caught his eye: Red Riversa, his favorite scream queen. However, his knowledge about her and her line of work proves to be a little obsessive, this further proves to be a threatening situation for Rivera since both Donald and the film’s uber-controlling director Luke are eyeing for her attention. When Donald finally snaps, he held the cast hostage one day and drove to the isolated part of the woods. One by one, he murders the casts for his little snuff movie, proving that he’s in control and the other casts are just disposable…over Riversa.

For a film with 75 minutes running time, I have to admit, the low budget really shines here like a nudist in a see-through raincoat. While Gutterballs may have an equal amount of money spent, what makes that title more enjoyable is its entire approach; let’s face it, the only fool who would try to make a “serious” horror flick out of low-budget are those who doesn’t know their limitations. Then again, since he is experimenting on targeting audiences, I guess Nicholson was trying to do a different approach in this one. 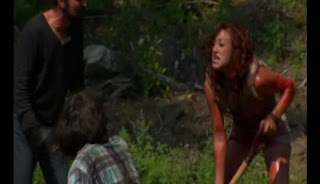 The downside from this title that seems to bother me is its devoid of humor, making the movie stale and very flat, with hardly anything going on other than the “explosive” last act. Making matters worse, the cast are just as disposable as they are presented in this movie with such questionable acting, with us probably caring very little to whether they live or die in this ordeal as a result. In all honesty, I just don't see why they didn't just gang up and beat the crap out of Cardini to escape, as I saw one or two chances for them to actually do that.

In its turn, however, Ryan Nicholson's signature gore isn't absent in this film, with each murder rich with the red stuff and even the simplest wounds spits out gallons of blood. Gore hounds would probably appreciate this over the lack of, well, quality of the story and direction; I on the other hand, as much as I have enjoyed some cheesy murders, I have to trash this one. Bloody violence alone does not make a slasher film if you don’t have a interesting story to make it work in the first place. Though, I hadn’t lost hope on ole’ Nicholson and I'm not really discouraging people not to see this, its just that he could had done more for this one. Now, I heard he’s making a sequel to our Bowling Bag-masked Psycho. That I wonder how it will end... 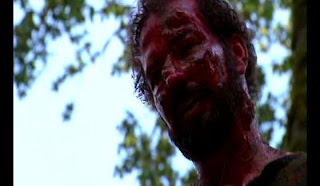