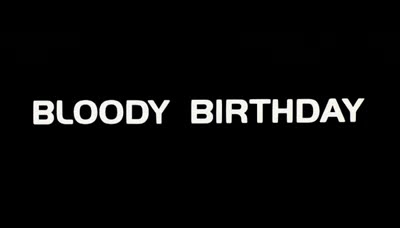 When it comes to horror movies, I always find killer children an interesting subject as it can work at times, watching the thrill of it all on how long these little ankle-biters can avoid suspicion as suspects of their own murder sprees, as well as the matter that it tests the movie on how far it can go with this taboo breaking. These reasons alone kept me going on watching movies like Bloody Birthday, an 80s attempt for a psycho-kid movie right around the height of the slasher flick boom.

In 1970, three children were born under a lunar eclipse, a phenomenon that somehow altered them into heartless killing machines ten years later. Said children are Debbie Brody, Curtis Taylor and Steven Seton, each hellbent on murdering anyone they see as easy targets or pose a threat to their secret hobby. With their tenth birthday coming around the corner, they decide to celebrate it with style by killing a few people and framing their deeds to our heroine, an astrologist-in-the-making teenager named Joyce Russel, and her kid brother, Timmy. It isn't too long before Joyce becomes well aware of the kids' evil intention and its up to her to stop them before its all too late.

If anything, I find Blood Birthday a cleverly controversial throw at the slasher basics (for its time) by using a taboo subject of homicidal children, tapping into the darker side of every tyke there is with a malicious twist that I really find workable in the movie. I will admit that the astrology element is a little cheesy if not questionable, the movie itself has this cheesy tone to its direction that makes good hammy fun on the concept, splashed with some fair nudity (fair being there's only one and its a funny scene at that), shocking kills (there's something about a nerdy-looking boy with glasses, holding a gun and shoots two teenagers to death, that disturbs to me...) and, dare I say, decent actors. It also got some fairly intense moments, such as one involving our kid hero being tricked into going inside a abandoned freezer while two of the killer kids lock him inside, and another wherein Joyce is attacked by the kids with a functioning junkyard car in an attempt to murder her (They even "slasher-fied" that scene by having one of them mask-up his face with a bed sheet. Cheap, but looks gewd!)

The kids themselves also pose a rather charming threat. The fact that their innocent charisma had them getting away with their evil deeds, as well as they're clever enough to cover their tracks, you really have to think twice before trusting any of them. Elizabeth Hoy, Billy Jayne and Andy freeman play the three killers and they played their roles with much content and devilish glee. Other than them, I'm fine with the rest of the cast; they're not anything special but they're good enough to root for..

A better attempt for the killer kiddie type of slasher, Bloody Birthday is a munchable little monster; a little underrated and overlooked, but otherwise good, fans of murderous tykes will surely get a kick out of this one.