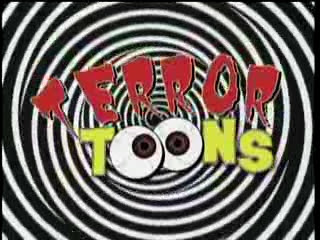 Now most of you would know that watching a Brain Damage released movie would either be a reaction similar to "You just wasted a good hour and a half of your life by watching this crap!" or "How did you find it?" For me, Terror Toons was shit. But a good kind of shit for that matter.

Normally that would end my review but I'm a little loaded with screenshots, so I'm gonna tell the story anyway: 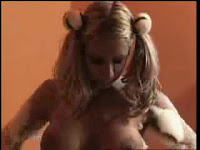 Two teen sisters, Candy and Cindy, were left alone by their parents for a wedding when they receive a mysterious DVD featuring a poorly animated cartoon horror movie called Terror Toons! With Dr. Carnage, a green-skinned mad genius and his new creation, Max Assassin, a machine-gun totting purple gorilla. All the while, Cindy invites her friends over a party, which is basically just these people drinking beer and playing with an Ouija board. (Tell me again why do people kept playing with Ouija boards?! Don't they ever watch the f*(&kin movies?) Candy then left the TV open with the disk still in it, unintentionally releasing the Toons to the real world somehow. 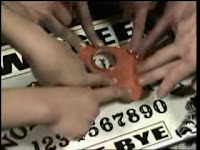 What soon follows is the toons killing off Candy, two pizza guys, a cartoon cop who came out of the disk to help them out and all of Cindy's party guest in various cartoonish ways with excessive gore. When Cindy's all that was left, she finds out that cartoons were made by the devil and that she has anime-magical girl super powers she could use  to beat the shit out of the toons.

Okay, production-wise, Terror Toons sucks. The gore effects are the only good thing about it, but the "animated" portions sucks, the lighting is amateurish, the audio echoes, the acting is "what?"- inducing and the whole thing is plain Z-grade titty flick material without the titties. ('cept one large pair)

But looking pass these (massive number of) drawbacks, it's so silly, that you can't help enjoying it! Yes, the animation is bad but the villains aren't animated and they're kinda badass and cool-looking at times. This film tries so hard to be creepy, but it only ended up being so funny, super-gory and over-the-top weird. (We got a drag queen posing as the mother of our two girls, the fakest looking "Hell", and a pink-haired anime-super girl twist...who would take all of these seriously, WHO?!)

Told true, this film is a friggin' waste basket of bad value, but its fun. I like it enough that I gave it half a five-star to pass it. Like it enough to give myself a sense of decency, if I had any, to not give it a rating higher than that coz Lord help me I'll be lying to you all if I say this is a GREAT movie.

Only those who enjoys a fixing of Thankskilling (2008) or Gutterballs (2008) can fully enjoy this low-value shlock piece (come to think of it, that implies to me, too!), It's darkly funny for the sake of being darkly funny; do not, and I mean DO NOT, attempt to try to make a single sense out of this piece because its a sad world in there. A world without one shred of sense. A world where if you, a serious-minded reader, fall into it, you'll be chewing your own toes inside a fridge by the time you finish this.

If any of what I said appeals to you involving the movie, then I ain't holding you back and grab a copy of this horrid horrible horror, Good luck to youse~!

Bodycount:
1 male gets disemboweled, had his skull pulled off from his back through his stomach
1 cartoon bird machine gunned
1 female gets an axe to her face
1 female had her neck broken
1 female had her back slit open with a scalpel, spine pulled off
1 male beheaded with giant scissors
1 male killed with pizza cutter
1 male laughs to death (!), vomits a lung
1 male had his brain surgically removed, brain dead
1 cartoon male blown up to the bones with dynamite
1 female sawed in half
1 cartoon gorilla neck broken, brains stomped off from his skull
1 cartoon male had his head split open with giant cartoon axe
Total: 13