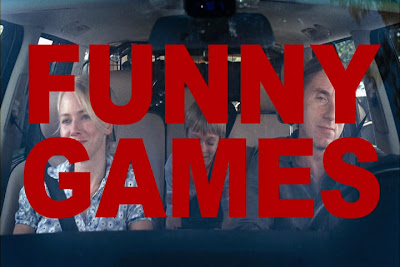 How often do we root for the killers? How many times did we cheered when Micheal impaled that poor boy to that door? Or when Jason bashed that woman's brains in against a tree? Or when Freddy cut off those fleshy veins off a boy as he pummels down to his death?

We've grown accustomed to violence, we know it when we see it, but is violence in films so much different from violence in reality? Is it just as bad?

Michael Haneke's US remake of his 1997 Austrian thriller somewhat questions this in a teasing yet powerful way, giving us, the gore era, violence in a manner that is somewhat uncomfortable, artistic, and hopeless.

A family of three goes to their vacation home only to find themselves harrased by a duo of seemingly well-educated young men in white gloves. At first, the men just stubbornly refuse to leave their home, apparently in need of some eggs which they kept breaking and asking for more. But after a moment of tension, one of the boys broke the father's leg and both held the family hostage in their own vacation house. The boys later find themselves in a situation where they are in control and plays a series of "games" with the family, with a prominent bet that the family will all be dead by tomorrow morning.

Funny Games is not a movie that entertains, but rather it's a deconstructing of our love for media violence, discreetly comparing our reaction to them between entertainment and reality.

It plays around the idea of whether the real monsters are the killers in this fiction, or the people who enjoys seeing the violence from said fiction, which is done here through broken fourth walls as one of the killers often engages with the audience by asking out opinions of the entire situation and even play his betting games with us. It's kinda chilling and yet it works in a darkly humorous manner.

As a movie (not a commentary), Funny Games is a shot-by-shot remake of the same 1997 Austrian movie of the same name (and by the same director). Being that, you don't really have to compare the movie from the original since you're pretty much watching the same thing. I also got a thing for home invasion films so that's a personal plus point for the movie, especially due to the way it was portrayed here; no background music, no clever camera angles, no stylish lighting, the movie is indeed bare-boned to its tone and left it as "realistic" as possible, which I find clever and very "artsy"

Since there's barely any camera tricks, the movie builds up suspense in a rather effective manner, including a scene where a young boy hides in a seemingly empty house with one of the killer stalking him, and another scene where the two killers forces the two beaten parents to pray or else they'll murder them. This somehow intensifies the kills and torture scenes despite happening offscreen, making them rather depressing and even serious, especially if it dawns on you that a sympathetic and innocent family are being tormented, rather than obnoxious teenagers and the like.

The film's biggest strength, however, is the two killers. Nameless upon notice, the two call themselves through various nicknames, like Beavis and Butthead, Tom and Jerry, and, popularly, "Peter" and "Paul". They're menacing enough in the sense that they're unpredictable and very clever, they treat this whole situation like a game (which is perhaps not far from being true), playing in a series of "rules" they made up and even cheat. (note: The infamous remote scene)

The rest of the casts are believable enough; Naomi Watts clearly went into a darker place in this cinematic art film, playing a performance with much frustration and anguish as the film dives deeper into chaos. Tim Roth is an excellent support; while his character ends up disabled for nearly the rest of the film, he also plays an equally troubled and wasted performance.

Its not a film for everyone; only those who can withstand the torture this film can inflict to them or those who understands this film's hidden approach would definitely re-watch it for the second or third time. While those who are looking for a good time should shy away from this one; its gonna be a dark place once you sat through this movie... 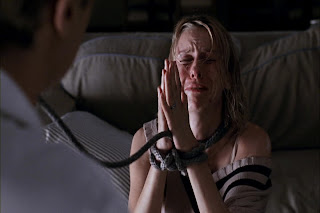