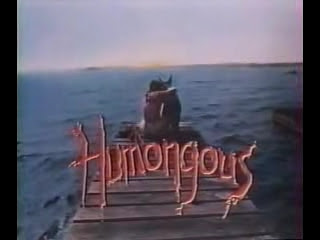 At a Labor Day in the 1940s, a woman named Ida was attending a party when she brushed off a drunken man to make her way at a nearby kettle to pet some dogs. The drunk, however, wasn't gonna have any of that treatment so he stalked and raped her in the woods, unknown to him that Ida's cries upset the nearby dogs enough for them break free and maul him near death. Ida, in turn, response to this the only way any of us would: grab a rock and bashed the shmuck's skull in with it. Hurray for dead rapists!

Fast forward to the present, two brothers and their friends are out on a boating trip to an inland lake hoping to soak up some sunshine so long as their bickering wouldn't get in the way. (Or at least one of them would just stop being a jerk for every five minutes) Buts the fates have something worse awaiting for them all; as the lake fogs up later that the night, the gang manages to spot a drifter on a rowboat who warns of some rocks ahead in gratitude of saving him. While the stranger insists on staying anchored until sunrise, one of the kids would rather show off and decided to go shore.

True enough, they crash to said rocks and now their boat have blown up to smithereens after a fire broke on the hull.

Luckily, they all made it out in time, but with them now stranded on "Dog Island", the group opted split up with some of them staying put with their injured friends while the rest look for help. They soon find out there's an old lady living alone in a house nearby but apart from her and some wild dogs, someone -or something- else is out there stalking the shipwrecked crew, hunting and eating them down one by one...

Humongous is a type of slasher flick that mashed-in monster elements to their killer, shown here as a feral cannibal (not humongous as the title makes it, but hulking either way) that mauls his victims instead of hacking them with garden tool or kitchen utensils. It's kinda fresh for its time, and the movie itself still managed some neat surprises in terms of b-flick entertainment to make up some of its own predictable elements.

For instance, the film's direction gave some of its characters more pivotal signs of brain activity and reasoning (read, some) all the while keeping the cheese completely intact. Perfect example? That one gal named Donna, who is not only best remembered for being a buxom babe, but also for practically finding new uses for her milkmounds such as storing berries in them for safekeeping and even to warm up an ailing friend. Clearly, if this doesn't make a cheesy movie then what will?

Of course, this kind of hamminess conflicts with the movie's attempt to be suspenseful or even a little macabre unfortunately, making the whole ordeal a tad uneven and felling a bit lagging with all of its Scooby-Doo style investigation identifying who our killer is. (A mystery painstakingly obvious seeing we opened with a raped woman) Other attempts to elevate a sense of flair and style including creepy lighting, odd camera angles and a tamer approach towards the murders do have their moments of workability thankfully, a welcome effort for its time that it tries to focus more on atmosphere instead gratuitous violence and T&A. May this be a good or a bad thing will all up to you but personally, I'm buying it.

Humongous is a fair attempt for your usual hack-slash and that's just about it. Nothing that special but it gets the job right one way or another.

Bodycount:
1 male had his head bashed with a rock after being mauled by dogs
1 dog had its neck broken
1 male killed offscreen
1 female thrown off to rocks
1 male had his head stomped off from the neck
1 female skeleton found
1 male bearhugged to death
1 female had her head crushed by killer's hands
1 male set ablaze, later gets a sign post impaled to his gut
total: 9
Posted by Kaijinu at 11:01 AM