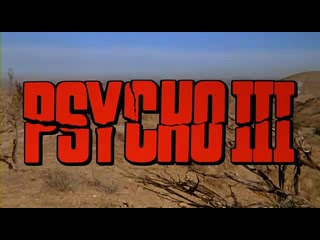 Psycho II= financial success=moderate approving critiques+ open ended ending=THIRD MOVIE! If my calculations are correct, that will also mean the production will do better, yes?

Hard to say but fairly enough, it's still watchable. 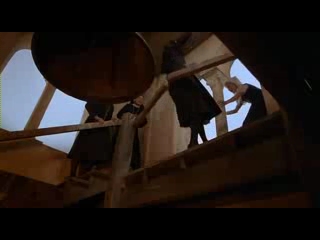 Punctured late into the 80s slasher boom, Psycho III takes place some years after the events of Part II, with Norman Bates back to his old murdering self and killing his aunt, who claimed to be his real mum. In this entry, however, Norman isn't the only troubled soul.

The movie opens hectically with a nun racing to the top of a bell tower to commit suicide as she denounces God. Said nun is Marlene Coyle, whose attempt to end her life lead to the death of another sister who was trying to help her, an act resulting to her exile.

After a long night walk and a near rape from soon-to-be Bate's assistant manager Duane Duke, Marlene ended up staying in bates Motel, much to Norman's uneasiness as she strongly resembles one late Marion Crane, one of his victims. 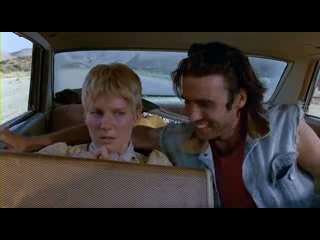 With Norman's troubled past getting to him again, he tried to kill the former nun that night but was surprised to find her dying, bleeding to death from wrists slits. Norman saves her and they fell in love, one troubled person with another, but just as things look like they'll be going better for Norman, "Mother" began taking her murderous jealousy out on random victims, and one Tracy Venable, a journalist doing a bit on serial killers letting out of the street, is starting to feel a tad unsure about Norman being cured of his dementia. It's only a matter of time before Norman totally loses it, and when he does, will there be anybody left to stop him?

While Psycho II promised and delivered well made twists, thrills, and enough blood to keep slasher fans giddy, Psycho III upped its game on the sleaze and blood, all the while focusing on Bate's struggle to be normal. While the latter have been done in II with much style and craft, III forgot the craft and ended up too exploited for its own good and became, for the first time, "just another slasher film". 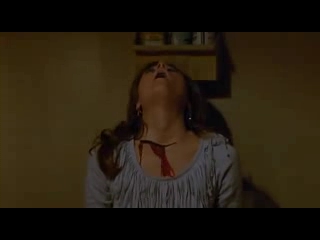 This isn't entirely a bad thing but it just sets the franchise on a road that nearly went to mediocrity. One reason for this was that it lacked any interesting characters, this including Marlene who, in all honesty, isn't that special of an additional to the franchise's own mythos as other than the fact that she's the first to make-out with Bates, she comes out as whiny, nihilistic and agnostically confused about both spiritual and Earthly matters. She's as delusional as Bates but she's unable to hide any of that and it is hard to like someone who's this confused with no distinctive likable traits.

And then there's the other two, the sleazy Duane, whose dream of becoming a rock star forces him to blackmail Bates into giving him the lease of the mansion for money, and Stacy Venable, whose persistence to find the truth and refusal to let Norman alone just pushed the poor man further back into killing than actually help him. These two just can't leave the crazy guy alone and they come out as rather annoying, to the point that I actually cheered when Duane bites it, but groaned when Stacy survived.

Thankfully, despite these annoying new casts, the one thing that I came to appreciate about this movie is that, to compare this with another film, Psycho III did what Texas Chainsaw massacre would do in its own first sequel and that is it tries to flesh out Norman's human side through "love". Technically, this is the first time we see Norman "properly" in love with a woman and the film tries to explore that phase of his life and how much it would directly affect him. The results is obviously chaotic but it does help move the story to an interesting light and develop its real star with much sympathy and need, leading up to a really satisfying yet grimly open ending. 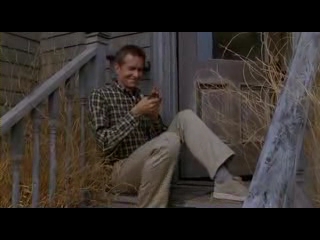 Overall, Psycho III is still watchable to some degree, the knife murders, though noticeably less than the previous film, are still bloody good, and its fun to see Bates doing his dirty work again. While the movie can grow on you, one cannot deny its simplistic entry into the whole foray. Nevertheless, it deserves a look as an underrated cult classic.