And This Little Hippy Went Wee-Wee-Wee, All The Way Home: The Tripper (2006) 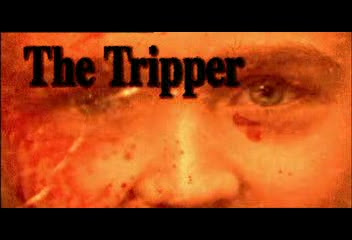 Hippies. You can either love them or hate them.

For our resident loonie here, he hates them with a political passion and he's handling the problem with a bloody red axe to boot!

Starting our story in the 80s, young Gus watches his father, a lumberjack, try to fight off a tree-hugger who's trying to stop them from taking down a colossal oak. When his father gets hit by said hippie, Gus reacts the only way he can: picking up a chainsaw and putting it inside the hugger's belleh. The father and son duo then gets separated by the cops and Gus is sent to a mental asylum.

Cut forward to the present. Samantha and her pot-riding friends are on their way to an "American Free Love" festival located in the middle of the woods. While on their way, they somehow angered a trio of hillbillies who later continues to harass them whenever they get the chance. But the real problem isn't these hicks, but rather it's the maniac hiding deeper in the woods, wearing a life-like Ronald Reagan mask (believe me) and have made a habit on killing people who goes to this festival every year.

With that, Samantha's clique may just find themselves knee deep into the line of fire of this killer, much to the displeasure of one deputy Buzz Hall who starts to wonder if the woods are really safe for parties like this...

The Tripper (2006) has its ups and downs but overall a good flick. Its gory enough for gore hounds, a little funny par political, and a whole lot of trippy cinematography to let you experience drug use without the actual partake. It's a real bloody treat from beginning to end as we get nudists getting disemboweled, hillbillies getting their guts torn off, a couple of nicely done beheadings, and one of the trippiest massacre scene where Reagan breaks into a pot session of at least twenty hippies and going axe-happy ape on them. (And one of those little pothead's a little boy!)

But while the gore flows like waterfalls in a rainy season, there's also the "horror-comedy" take on the movie which, sadly, fell flat for me: it does have cheesy one-liners, mostly from our killer, but they weren't funny enough to tickle my funny bones. Probably because there were some political slurs into them and, sadly, I never involve myself with politics. (Politics bore me to death) Thankfully, if the lines doesn't chuckle, the weird scenes sometimes do the trick as being a hippie-based massacre, our victims are usually "far-out" in their little drug-infused world, uttering lines like " What the fuck's your problem, man?" after getting a body part or two off their places. Its funny, and a little bit of a guilty pleasure, seeing totally defenseless hippies being hacked up with an axe and reacting to it so differently.

The artsy editing may be another drawback; the whole movie did a lot of camera and visual effects to match a drug world to fit with the tone and theme of the film. It's a nice attempt to bring something entirely different for a slasher, but things like this can make some viewers who aren't used to this very uncomfortable and get more headaches than a blood-splattered good time.

Now, while David Arquette, our Wes Craven's Scream star-turned-director mentioned his real intention was to make a fun movie with The Tripper, I can't help but see a small satire here; while the killer's identity was rather obvious given to the kind of opening murder we were treated with, the movie's other mystery was how on Earth did he got out, which later can be pointed out to something Ronald did in the 80s. (I dunno what, but something about releasing maniacs in the street to cut budgets? Dunno, "politics bore me...") Not a single political character and slur is left untouched here, making this a little suspicious.

Even so, the film's not bad. The Tripper (2006) could have gone a little smoother, but it went a tad -no, scratch that- too hard to be "fun". It's silly seeing a presidential figures as killers, with the likes of "Richard Nixon" (Horror House on Highway Five), "George Washington" (Masters of Horror's "The Washingtonians") and "Abraham Lincoln" (President's Day (2010)) being portrayed as human monsters, but some of them wasn't anywhere as satirical and terrifying as an axe-weilding, knife gutting, rabid dog breeding backwoods psycho. Horror junkies who are into politics, republicans or just want to see something outrageous, you have it here.