Something dark, creepy and Kinski, this way come: Crawlspace (1986) 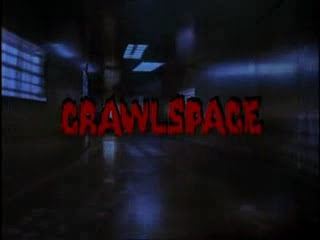 Right before Charles Band went haywire on creating creepy little critters for DTV movies, he treated us with this fair, creative yet very underrated hidden gem of a slasher.
Klaus Kinski is Karl Gunther is a superintendent of an apartment complex which he admits just to beautiful girls. Unknown to them, the man is also a Neo-Nazi, the son of a German surgeon, finding excitement from the mutilations and murders he commits to his tenants. He's willing to dispose anyone who gets in the way of his sick hobby as well as tests his torture devices on them.

As more and more victims fall to his blade, he finally snaps one night and concludes that he'll always be his own God, Jury and Executioner, thus resulting to his killing spree. It's up to the new occupant, Lori Brancoft, and a surgically muted Martha White, a prisoner he kept alive for God knows how long, to stop him before he murders them all.
Perhaps one (and often argued) reason why this film is so underrated was that despite being labeled a "slasher", Crawlspace barely touched the red stuff at all. Most of the murders committed by our psycho was done offscreen and often suggested through jarred body parts, though the later massacre had him displaying his victims in their whole mutilated glory bodies with just the same impact as any shocking murders that would happen onscreen. Though some will still find these simplified killings as a cheat and shows nothing more than the minimal budget of the movie, I personally don't mind since the narrative was worth it and it did had its share of squeamish moments.
Like Maniac (1980) or Evilspeak (1981), the first half of the film concentrates on the character as he explores his fascination and even fight his own inner demons; some scenes had him attempting to end all of his murders and torments by playing a round of Russian Roulette with himself. If the empty chamber clicks, he'll just sighs "So be it" and continues to live a day until his next murder. It's unusually contrasting as later, he would be documenting his experiences with much interest and intrigue.

The movie only became a slasher at the second half when he lose it; it is here that it shifts to your usual conventions, with our final girls trying to outrun and survive the monster, now hellbent on murder. Like the last act of an earlier Friday the 13th sequel, Karl even had the bodies of his previous victims strewn all over the building in an attempt to deter escape or fight back, resulting to quite an exhilarating last act that was worth the wait.
"Hidden Gem" befits this film. Crawlspace is not your usual slasher, yes, but it's definitely worth the look. Keeping an open mind is what I usually do to enjoy a film, and this succeeds on making an impact in terms of style, aura, a good acting cast of interesting characters (Kinski the most) and even some sense of dread. Its low-budget obviously showed no hindrance on making this film as entertaining and intriguing as possible, a direction I clearly admire from this film. If only Charles band tries harder nowadays...