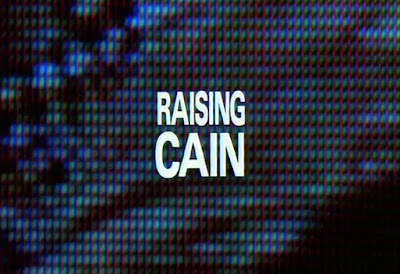 Sometimes, I came up with the assumption that most of Brian De Palma's thrillers were might as well be slashers with its razor happy killers, modest bodycounts, and pure tributes to giallo films. Raising Cain, though nowhere close to what I consider as a Palma masterpiece, somewhat ended up an underrated example of a slick thriller, all because of this movie's similarity to a reconstructed Psycho (1960).

Dr. Carter Nix is a child psychologist who suffers from multiple identity disorder, a revelation made too obvious in the beginning but nonetheless continues to stroll in as our lead knocks a woman unconscious with chloroform, drowns her in a lake and gave her child to his father for some experiments. All the while, his wife Jenny Nix is also facing her own dilemma when she is starting to find her relationship with Carter growing stale and begins and affair with an old flame, Jack Dante.

Soon enough though, Carter becomes aware of his wife's little game of hookie, traps her inside her own car while it sinks into a river and attempts frame Jack for the murder. But as a sudden twist, Jenny survives her drowning and finds her daughter missing. Assuming Carter committed the crimes, Jenny races with time to find her missing daughter as well as the other children Carter took.

While Raising Cain starts off slow, the film eventually progresses into pure darker giallo elements such as paranoia, voyeur and obssession as Carter's identities begins to take uncontrollably, making us wonder who is control and who is not, as well as whether Carter can be trusted or is he a menace all in all.

Unfortunately, this is only how complicated things get and it is comparably tamer than what most De Palma made in the 80s, playing it low on sex and shocking gore and instead placing more emphasis on the thrills and the characters. While John Lithgow playing three characters and five personalities can be considered a highlight, some may find it a little underdone or overdone, but thankfully we have a contrasting grace that is Lolita Davidovich, as Jenny, a character that shares the same marital conflict with another Brain De Palma character, Kate Miller of Dressed to Kill, only this time our Jenny survives and had a drastic change from troubled and sexually-starved wife to a hardened bare-boned mother searching for her child.

Because of the film's focus on (one/two-dimensional) characters, it ended up feeling rather underwhelming and peppered with a lot pf plot holes, as if more could have been more done so it would have the same impact as most of De Palma's other films. But, looking pass these flaws, I still find a good film to watch, something I can safely share with my folks to have a good time and actually feel good about it (even with its, somewhat, ambiguous ending) . If I could find words to describe this film simply, it'll be "A Thriller with a funny bone", cuz it is.

While Raising Cain exorcised blood and exploitation, it instead makes up for the losses with eye candy cinematography, silly moments, some shocks and a few laughable macabre. Frances Sternhagen as Dr. Lynn Waldheim is one of the more bizarre psychiatrists I've ever seen (next to Halloween's Dr. Loomis), freaking out more about her wig, spending four minutes talking in perhaps the most slowest elevator ever, walking around with two investigators while getting a wrong turn or two.She's a funny minor character that parodies the psychiatrist from Psycho, who explains Norman's condition.

And speaking of Psycho, I do also noticed a few nod to Hitchcock. While the split-personality is a dead giveaway to the tribute, the title sequence itself used straight lines to cut away the title, the same kind of "symbolism" used in the opening of that film. And then there's the fact that Carter/Cain dumps the cars with their owners still inside it to a river, the same MO bates did to his victims.

While obviously not the best of his works, Brain De Palma still managed to wrangle a little devil out of this one. Raising Cain is a tame, (slightly) funny, but still an effective thriller when set on the right mood. Definitely not for the serious minded and lawyers.

bodycount:
1 female drowned in a river inside her car
1 female succumbs to cancer (flashback)
1 female accidentally impaled on the chest by a concrete statue (dream)
1 female knifed on the chest
1 male killed (method not seen)
total: 5