Psycho of the Month: John Ryder 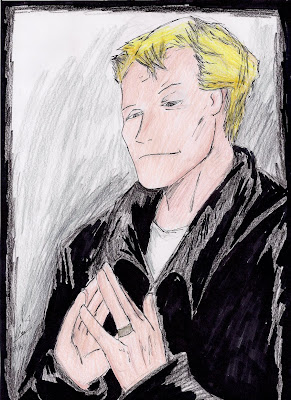 As Jim Halsey once said "My mom told me not to do this", he's referring to picking up hitchhikers, especially those who wear dark clothing, doesn't talk much and pack a knife and pistol around. His name is John Ryder, or at lest that's what he calls himself; a john doe of pure psychotic intentions and enjoys playing a game of chase around his victims. Mayhem excites him, challenges are fun for him, murder is grand for him.

His last target, Jim, became his most worthy foe, able to outrun him and able to escape his grasp. Jim will soon find himself in a position he never dream being in: a prey for who might be the Devil himself.
Posted by Kaijinu at 11:52 AM

Email ThisBlogThis!Share to TwitterShare to FacebookShare to Pinterest
Labels: Badly Drawn masterpieces of mine, Psycho of the month, Random Stuff, slasher