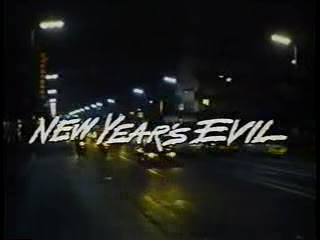 It's the end of 1980 and the countdown for the new year begins when Blaze, a show hostess of "Hollywood Hotline" and self-entitled "Queen of Rock and Roll", finds herself the attention of a loon, who call himself "EVILLLLLLLL". Out in the streets of New York, "Evil" is making threatening calls to Blaze during her show with a voice (modified by an electric device) that sounds like a grunting version of Elmer Fudd or a drunk Fozie The Bear (One of the film's cheesy charms!) claiming to-wait...wait...

He does this literally as every time it strikes midnight at a certain American timezone, murdering a one hapless victim and letting our lead gal listen to their recorded screams every time Evil tauntingly calls back. Responding cops tell Blaze that she'll be "Evil's" final victim by the strike of their midnight, but assures her that they will catch him. Though obviously distraught, Blaze still continues to host her rock and roll show, letting her crowd have their fun while "Evil" gets closer to Blaze.

New Year's Evil is one of those stranger early 80s slashers that tries to stand up by doing something entirely elaborate for its killer's modus operandi, going afar from giving him the amateur's skill of disguising himself as a series of personas (a nurse, a photographer, a priest and even a cop) to the overly complicated goal of murdering innocent bystanders in accordance to a timezone system.

More odd from this film is its characterization of our lead as it appears there's nothing worth rooting for this gal; Blaze is rude, demanding and a tad self-centered, hinted to have cheated on her former husband which somehow leads to the massacre she's tied-in right now. It's as if the film was going for a direction that may spark some mean-spirited misogyny but with its cheesy execution, I find the matter hardly offensive and border away any serious matter.

Yes, it hardly passes as a decent slasher but New Year's Evil does make it up for being unintentionally funny, especially if it have the killer talk like an enraged cartoon alien and getting himself on the run from not only trailing cops, but enraged bikers as well! The film also acts like a time capsule back to the 80s, with a number of no-name bands playing here and there to fill up the running time in exchange of suspense. It's a nice throwback seeing these bands are pretty good. (I got a taste for oldies)

New Year's Evil is worth seeing if you're into cheese, nostalgia, 80s rock and roll, bad-taste or bad-films in general, or just in it for some unsuspecting laughs, then feast your eyes on this. Those who might see this people as crap, well, I ain't disagreeing you, but ain't that a little hard?