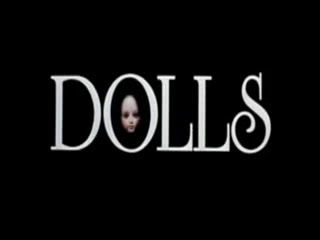 Horror film? Not as a whole, I think.

Stuart Gordon's Dolls is a little bit less than your standard killer doll movie and more of a dark fairytale with living, homicidal dolls and Guy Rolfe before his Puppet Master roles.
﻿﻿﻿
In Dolls, two rich snobs and their daughter, Judy, are on their way to a vacation when a storm rolled in and their car gets stuck in the middle of the road. Fortunately, they find refuge in an old mansion where two lonely yet kind elderly couples welcome them in along with three others who also got caught in the storm, a kind man-child named Ralph and two punk rock girls he was giving a lift to.

As the elderly couple gives them rooms to stay in until the storm clears out, some of these people wants to take advantage to the kindness of the owners, stealing a few antiques or breaking the dolls that literally filled the place. But the owners have their own little secret: not only where they toy-makers by profession, but their dolls can come to life...and kill.
Most of the time, Dolls feels like the kind of movie that you can watch with your little bro, sis, and/or cousins, evidently with its child-like theme, and the idea that only innocence can save them. It has very little nudity (if any), high on cheese and the plot feels more like a fairy tale with its themes like elves and magic. ﻿﻿﻿﻿﻿﻿However, there are some factors that make this film a questionable case as while the kills are few, they're no mere simple murders. We got bodies swung repeatedly against walls, tiny daggers and shear cutting through skin, sockets missing its eyes, so despite all that child-like aura this film reeks, its still a horror film at its core and not a tame one at that.

Lets also not forget the creep factor this film has; let's face it, living dolls are a little unnerving at times, but if they all look at you in unison at the same time with those glass-like smiles, or add the fact that you can see a dying elf inside a cracked one, you can't help but feel uneasy and bound to scar some young'uns especially if those little dolls acts and moves around so fluidly (all thanks to the special effects wiz Dave Allen (Honey I shrunk the Kids (1989))﻿﻿﻿﻿﻿﻿
﻿
A more innocent departure to the killer doll sub-sub-genre, Dolls is a nice little gem that softens hearts while creeping you at the same time. If you ever see a Punch puppet after seeing this movie, you might wanna feel a little warmer towards the feller.

bodycount:
1 female had an arm mauled off (dream)
1 male had his face clawed open (dream)
1 female swung repeatedly to the wall, later had her eyes gouged
1 female repeatedly stabbed with toy blades, later accidentally jumps through a window
1 female shot to death by toy soldiers
total: 5
Posted by Kaijinu at 10:46 AM