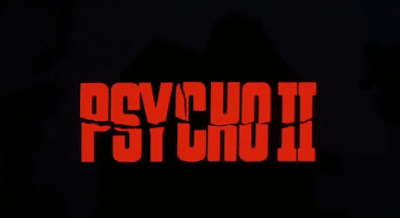 I had no intention of watching the Psycho sequels, I really don't. But this, along with the rest of the series, was on TV some nights ago, completely uncut, which meant I get to watch this entire franchise for free and you don't get things for free that often!


Psycho II marks the return of Anthony Perkins as Norman Bates, the titular psycho who murdered six people back in the 60s, now returning to his motel after 22 years being institutionalized. Dr. Bill Raymond (Robert Loggia) is convinced that Norman's perfectly fit to dwell within society again, but one Lila Loomis (Vera Miles), the sister of one Bates' victims, thinks otherwise. Still, Norman does attempt to be normal, even getting a job at a local diner as a dish washer and a bus boy, and go as far as befriending a co-worker, Mary Samuels (Meg Tilly), a young waitress who at first was uncomfortable with Norman but later warms up to him.


It was all fine for Mr. Bates until he starts receiving notes from his late mother, which he dismissed first as a cruel joke from those who didn't like him. But when someone sounding like his mother starts phoning him and a new string of knife murders start to take lives nearby the Bates residence, is Norman becoming "confused" again?

Being a fan of the original and having so much respect for it, I was skeptical that this sequel would hardly make up for the Hitchcockian flavor that the first film has, but Psycho II knows its audience like the back of its hands and went from a psycho-thriller to a bonafide slasher-drama as Bates is no longer just a monster here, but also a victim of his own insanity. Whether he's responsible for all the murders happening upon his release or not, how this will effect the new life he's having creates a fine tension for the film and overall, it works.


What the sequel does succeed even more is that it's genuinely creepy and unsettling; with Norman seeing his dead mother walking behind the curtains of his room, the threatening notes appearing out of nowhere, Norman speaking to a blank phone, the psychological torment inflicted upon Bates and those who supports him does call for some eeriness that's well made for a sequel. Thrown in some dead teenagers, a decently numbered bodycount, and some violent (and creative) knife murders, and we have ourselves here a delicious entry to the mixed bag of gags of 80s slashers.

Another thing I find impressive about this movie is the well-handled use of familiar elements from the original; showers, voyeurism, the ole' fashion "bad things happen to good people at the most unexpected time" scenario (ironically due to Norman's past infamy, but not played very well unfortunately), I have to admit defeat and accept this worthy sequel as an unbeatable slasher classic.


The only drawback to Psycho II is the unnecessary twist reveal it has in the end which is followed by a shocking last minute murder ending that made me wince. Apart from that, it's creepy, tense, scary and fun, you never get to see a sequel this good nowadays so might as well take Psycho II on its own terms and like it.