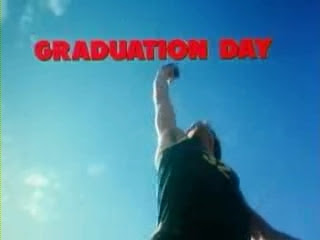 Okay, let me get something off my chest first: I never like Troma movies. At least, not a lot. Yes, they are supposed to be bad-taste funny and I am quite aware that these low-budget shlocks surprisingly made at least a trillion fans out there, but I'm not one of them.

For me, I find the humor too crude and way too pushy to be funny and the story they come up with felt too "cartoonish" and boring for my liking, but once in a blue moon, they do release something that actually cater to my level of cheesy bloodshed like Mother's Day (1980), Blood Hook (1986) and the obscure Dead Dudes in the House (1991), films I sincerely enjoyed despite the weirdness. So when I gave Graduation Day a chance to further redeem Troma's name in my eyes, I cleared my mind and said to myself "Okay, so they normally do sleazy, outrageous, comedy-horror with tons of gore, lots of boobs, lot of fat guys going shirtless and use some of the same props and clips over and over again, but this one's made in the 80s and its trailer looks decent enough to be likable. If its not, try thinking of it as a horror-comedy and you'll probably do just fine!"

When Laura Ramstead suffers a heart attack after stressing herself in a hundred meter run, someone decided this is a good reason enough to commit a killing spree in the name of justice-slash-revenge a few months later whilst the team's graduation day is nearing by the corner and everybody is getting psyched up. Dressed in a fencing uniform and mask, this loon starts offing the track team one by one in various sports themed murder, including a pole-volter landing into a bed of nails, literally; some flying football with a javelin attached to it that impales people, rapiers that beheads...yeah, you read it right, our killer somehow found a way how to cut people's heads off with a fencing rapier...

One word came to my mind while watching this movie and that is "cheesy". Maybe a little too much. Heck, the opening theme is already a warning sign for all of the mozzarella that would pile up in the whole movie, a montage of sporting events where our would-be dead team members participate in various games like shuttlecock, races and gymnastics while a disco tune sings that "everybody wants to be a winner."

If that's not cheesy enough for you, how about a disco themed graduation ball complete with roller rinks? Or the proof that the King is alive as an Elvis Presley wannabe stars as a Piano teacher? Or how about ta final girl vs evil maniac fight involving flying kicks?  Even if the film isn't trying to be a grilled cheese sandwich and sincerely attempted to be a straight horror at times, that failed to leave that much good impression as the gore effects look fake, the kills are hardly plausible (seriously, how does a fencing blade decapitate someone?!) and the whodunit mystery isn't all that engaging. The only thing that worked for me here is that the final confrontation dabbled on the dark stuff by having our killer dig up the decomposing body of our deceased track star and dressing her up in graduation clothes in what I assume is a tribute to Girls Nite Out (1984).

Those who love a good cheddar whodunit will find a haven in this movie. Heck, the rest of the world might as well too, but I'm staying away from this one. When I find something boring then I will say it is boring and Graduation Day failed to enlighten me and it left a still bland taste in my mouth. Watch it if you like. It's you choice...