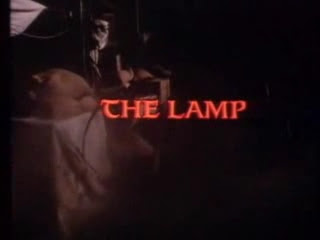 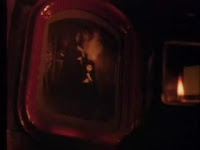 In 1893, an Arab migrate harbored a mystic lamp that somehow released something powerful enough to nearly murder the an entire boat crew, with the only survivor being the migrant's young daughter. 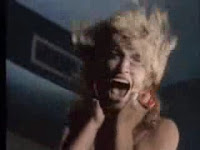 Fast forward to the present, the girl was now an elderly woman living alone in the woods and soon became a victims of a brutal home invasion when a trio of hillbilly hicks decided to rob her. When the thieves found the accursed lamp, they unknowingly released the evil residing in it once more which then proceeds to kill everyone in sight before retreating back to the lamp.

As morning came, the cops cleared up the massacre and the lamp was moved to a nearby museum where Dr. Wallace, the curator, plans to add it to the other oddities displayed. His daughter Alex, who's visiting his museum as a part of her class' field trip (which I find odd seeing they're a little too old for field trips), finds a trinket tuckered with the lamp that puts her under its influence upon wearing it and tricks her friends into staying in the museum overnight for some fun. (Cuz, as we all know, big historical figures and dusty fossils turn on girls!) 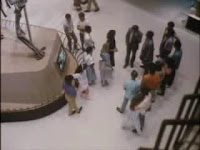 Unknowingly staying with them were two racists skinheads who wanted to get revenge on their African American principal by raping his daughter. But just as these groups of sex-hungry kiddies were starting to enjoy themselves, the being in the lamp got released from his bounds again and goes to another killing spree. When Alex is all that's left, she must come face to face against a demon who will stop at nothing to finish everyone off.

Now I'll admit first that the story did sounded interesting; a demonic djinn with a power to make anything come to life with a blood lust to match, or levitate any objects as its murder weapons, released in a museum. What could go wrong?

Well, while the story is decent enough to be a fun bodycount-friendly horror-slasher, the execution was a tad complicated to follow.

First, you can't have a good movie if none of the characters are likable or at least interesting; the teenagers are as bland as cardboard pop-ups and the supposed final girl isn't all that root-worthy either. The film also have a mean-spirited streak by featuring not one, but two evil stereotypes under the form of evil red necks and a duo of disrespecting skin-heads. I guess it's the producer's way of showing that the main supernatural villain cares very little whether the victim deserves their death or not but from a viewer's point of view this is just depressing and confusing; with barely any likable characters, The Lamp is too dark to be humorous and yet too cheesy to be taken seriously. 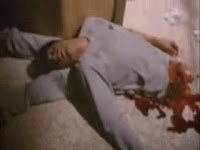 While the story was poorly directed and the characters were thin pieces of sliced cheese, the film however did great in keeping the kills as lively and creative as possible. With the special effects and gore being plentiful despite the low budget, make-up master behind some of my favorite Henenlotter films Gabe Bartalos imaginatively puts some murderous use to the museum's exhibits such as displayed spears, dinosaur fossils and even some mummies, messily doing away one victims at a time until the cheesy climax that involved the djinn revealed, which was sadly underwhelming but workable.

The Lamp is best remembered for its special effects and that alone. If you'e looking for a nasty 80s bodycount film with some fairly okay old-fashioned deaths and giant animatronics being passed as a monster, well, you have this video to rent! May it be a treasure best forgotten or found will be all up to you!

Bodycount:
1 male seen dead
1 female dies (cause unknown)
1 male mentioned decapitated, blood splatter seen
1 elderly female axed on the head
1 male forced head first into an axe
1 male torn in half
1 female strangled
1 male lifted to a ceiling fan, shredded
1 male speared on the chest
1 male seen torn in half
1 female attacked by snakes
1 male attacked on the groin by a snake
1 male had his head crushed with a medieval mask, his neck twisted
1 male impaled on the gut by a flying horned tribal mask
1 female killed offscreen
1 male found with jewelries impaled to his face
1 male had his neck bitten open by a revived corpse
1 male found dead
total: 18