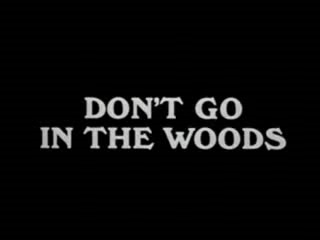 Four young campers, Craig, Peter, Ingrid and Joanie, back-pack through the mountains for a relaxing weekend being one with nature...as always. With the forest becoming denser and darker, Peter and Ingrid fear that they are lost. But lurking among the bushes and the woods themselves is no animal, as a large figure began making their way through anyone, hacking them to death.
﻿
When one of their own gets the blade into his flesh, our gang flees into the forest. With a deranged maniac on their trail, who will survive in the forest?

Technically, it's four campers, with lazy scripts uttering out of their porktraps, walking around the forest all day for the first hour, while people around are dying off in rather gory methods with hardly anybody noticing any of that! In fact one of them dead folks even drop by, literally, near them whilst playing in a stream like some fucktart on PCP! I mean this body could have been touching them, yet they still continue to play around! To top it all worse, we got one lard arse of a sheriff, as usual, who tops a comedy duo with his deputy crashing in a tad too late as many of his randomly placed beloved city trash of a tourist went headless or stabbed happy. The murders, oh God, the murders! It's completely atrocious! I'm fine with spear stabs, but come on, accordions are not scary! So stop playing it every time there's a kill!

﻿﻿Shit goes to epic proportions when a manhunt takes place, but that didn't make any of this any better. In fact, it didn't do anything much at all! When we finally see the killer, it hardly matters cuz every ounce of my expectations had just went down the toilet.
I can't even believed I just went through all of this. What came over me?! Is it desperation? Was it for experience? God, if I had known it was that horrible, I should just took somebody's word for it and make a review out of that instead of torturing myself with this Municipal Waste!

I better turn off my laptop now after deleting this movie from my files. After a while, I'll see you when I recover from this mindrape I just experienced.

By the way, BACKWOOD HOBOS ARE NOT SCARY!