Chuck Norris Is So Badass, He's Too Good For This Movie: Silent Rage (1982) 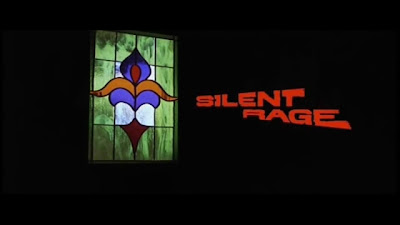 Before this movie, I have never seen a Chuck Norris flick. I'm serious. I've heard about Chuck and did the jokes, but I disgrace myself as a cinephile for not seeing at least one Norris movie so I guess it's only fitting that my first movie featuring this guy would be Silent Rage, an action-slasher hybrid walking around a messy road of familiar bodycounting grounds and evil science while exploiting the supposed badassery that is Carlos Ray "Chuck" Norris.

In this flick, Norris plays Sheriff Dan Stevens, brought to a house where local nut John Kirby (Brian Libby) just went axe happy and killed two of the house's tenants. After a short fight with the law, John manages to break free from his handcuffs and tries to kill his way out only to be outnumbered by cops and shot dead.

Desperate to save him (even if he's proven to be a deranged lunatic) his psychiatrist Tom Halman (Ron Sliver) decided to ship his body to a local bioengineering lab (like any small Texan town would have) where one of the doctors suggests using an untested and experimental serum that should give Kirby regenerative powers. (Insert my confused face here asking "why?!") Of course, Kirby wakes up and thanked the doctors the only way he knows how: crushing the lives out of them and breaking into their homes to kill off their loved ones.

Obviously, it's Chuck Norris to the rescue! But not before he swoons a beautiful dame, be a big daddy figure to an adorkable deputy, fight off a ruthless gang in a bar, and go topless for the fans!

As much as I enjoy the absurdity of the plot, I find myself in a bit of a conflict. True, it's a unique entry to the overly familiar slasher trappings thanks to its scifi mumbo-jumbo and beat 'em up action, but the film is really nothing more than clippings of Chuck Norris being badass by punching the crap out of people. There's little real story to follow and there's too many "what?!"inducing plot holes that deserve a facepalm or two from its audience. (Like, oh I don't know, mad scientists in Texas with enough resources to conduct genetic enhancement experiments and actually succeed. I'm quite curious, actually. How on Earth does a small town hospital acquire a genetics lab in the first place?!)

Then again, this strange direction is what makes this film so much fun; apart from Norris, we got a curious set of characters including Charlie (Stephen Furst), an adorable little butterball of a deputy who has a tragic past concerning a puppy in a freezer (!), and one Alison Halman (Toni Kalem), whose idea of romantic evening with the Norris is stargazing outside in a hammock and being our damsel in distress. (Yep, no Final Girl in this one. This is Chuck's turf!)

It also took a while before the gruesome stuffs happen, though I have to admit the wait was kinda worth it since the slasher portions aren't all that bad. I do dig the super-regenerative villain angle as it is portrayed with enough fondue that it is amusing: not only did the serum gave him the ability to heal in seconds, but it interestingly also gave him immense strength, enough to bludgeon people to death with ease. Even though I prefer my slashers slashing victims than beating them dead, I can over-look this for the decent looking Halloween-esque stalking scenes.

The finale is a bit of a let down sadly, as The Beard unleashes all of his fury unto our killer with much restrained action thanks to this scene being the last few minutes before the film ends. In fact, I don't think anyone from the scripting department thought up a good way to end this properly since it decided to leave us hanging on a possible follow-up. (That, of course, never came)

As far as slasher hybrids are concerned, Silent Rage is a confused title, shifting gears so often from one genre to another like an old man with Alzheimer in the wheel of a car. Distracting much, but bearable enough if you don't take any of this seriously. It's cheap, cheesy, almost worth being my first Chuck Norris film. (But do I want to see another? Well...)

bodycount:
1 male gets an axe to the face
1 female axed
1 male strangled (mostly offscreen)
1 female had her head crushed against the wall
1 male gets a syringe full of sulfuric acid to the neck
1 male had his neck snapped
1 male bludgeoned repeatedly against the wall
1 male killed (method unknown)
1 male found with cracked skull
1 male dies from a broken back
total:10
Posted by Kaijinu at 1:52 PM