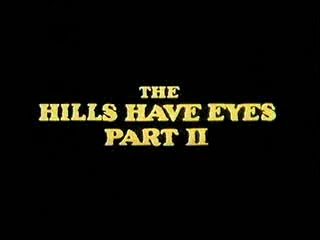 From this little scroll, you can tell The Hills Have Eyes Part II wasn't meant to be taken seriously. 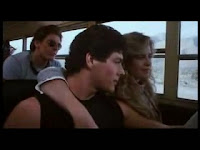 We start the story with one of the previous film's survivor, Bobby Carter, having a nightmare-flashback about the horrid events that befell on his family that faithful day. The trauma was too much for him that he chickened out on a trip to the very same desert with his girlfriend, Rachel, where they were supposed to test a new formula fuel for dirt bikes (cleverly named "Super Formula") with the friends. Not wanting to miss the opportunity, the gang went on without him which turned out to be a terrible idea as not only was the bus low on fuel, but one of them have been reading the map upside-down and forget its daylight savings time. So their solution? Take a detour into the dirt road and stop on a silver mine shaft in hopes for fuel.

Before you could say "D'OH!", Rachel was then attacked by a mongoloid, Pluto, who was less than happy to see her. After kicking the crap out of our maniac, Rachel reveals to everyone that she's Ruby from the first film and the deformed loon she just fought was her brother so somehow survived through the last film. Worse, she also found out that their uncle, a huge cannibal named Reaper, had taken over the family business of hunting down folks in the desert and he had set his teeth and machete on killing and eating them. 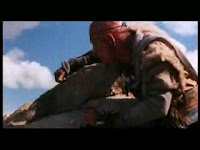 If the first Hills was a survival revenge flick, The Hills Have Eyes Part II is a full blown slasher and that alone; gone is the deconstruction of good and evil, gone is the blurring of that line, gone is the tribulations, the survival, the hardships, and in their place goes the cheese, messy kills, one-by-one murder spree and the most outrageous plot ever. If anything, the film is notoriously dumber as the casts consistently do a lot of dumb things that may or may not have them killed, such as play pranks, have sex, jokes around, take non-sexy showers, all of it after Rachel told them of the dangers that might pop up any moment, Its pile over pile of bad choices enough to wonder if these guys are even friends to begin with.

So with the social allegory stepping out and the dumbfoundery stepping in, you would expect a terrible movie and, for truth's sake, Hills Part II is pretty crappy. And yet, I admit it is still worth the watch; unlike the first movie, Hills Part II packed some kills that were more faithful to the slasher tone and introduced a new cannibal named Reaper who wasn't afraid to hulk over his victims. He is a mean killing and eating machine that may look more funny looking than scary, but memorable enough for his odd character and brutish appetite. 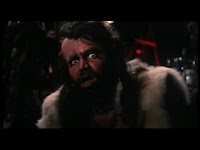 An interesting fact about this movie was that Wes Craven, the director of the original, made this follow-up because he needed the cash. This would explain the rushed and uninspired feel it has all through out, from the lazy use of stock footage, eerily familiar soundtracks (Friday the 13th anyone?) and every slasher cliche touched. Still, for its worth, Hills Part II was entertaining thanks to its strangeness and hilariously bad production. It may not be the best but it has an audience, those looking for a bad cheese to soak their nights with and too those with a good sense of humor and appreciation.

So try opening some booze and play this tape for the night,and you might have yourself a film to poke fun at.

bodycount:
1 male crushed by boulder, later found mutilated
1 male gets a spear shot to his chest
1 male had his head hacked with hatchet
1 female had her throat slashed with machete
1 female pushed and lands head first to a rock (debatable, injury doesn't look too fatal)
1 male pushed by a dog and falls off a cliff
1 male burned to death after falling into a mine shaft
total: 8 (?)
Posted by Kaijinu at 9:27 PM