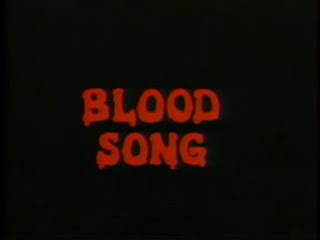 In 1955, young Paul Foley witnessed his reasonably pissed-off dad murder his wife and her lover while they were havign sex. After doing the dirty deed, Mr. Foley puts his pistol to his mouth and fires away, leaving a traumatized Paul to plays his flute.

No really, he plays a friggin flute in his own form of post-traumatic shock. Well, least he didn’t try eating the dead bodies…

Any who, fast forward to 82’, Marion ( Donna Wilkes) is having these vivid dreams about a psycho, the now grown up Paul Foley (played by Frankie Avalon, who's years older after his teen idol status), escaping his ward and is now offing people who disliked his flute solo. Frightened and confused, Marion tries to tell her folks and her boyfriend about these horrid visions, but typically, nobody believes her.
﻿﻿
As the visions get more brutal and the killer apparently getting closer to her, it begins to take toll on Marion's sanity and her life, so she decided to take a long stroll on the beach one day and, as bad luck had it, she stumbled upon none other than Paul, burying his latest addition to his murder spree. After escaping his clutches, Marion becomes Paul's little prey and he's not gonna give her up that easy...

What I find shocking here is the quality of the film. Its practically well made despite the obscure story, with well played casts, great cinematography, awesome chase scenes (the best had to be this film's 20 minute Sawmill chase scene), and decent murders. It's pile upon pile of the good shit coating a rather trash of a plot, which involves psychic links acquired via blood transfusions. It is weird but Blood Song tried to make the idea workable and expected us to follow it; thankfully this psychic link wasn't much of a big point later on. (as if that element didn't happen)
﻿
As you can tell by now, the film is far from a certified classic. For starters, the idea of visions is already tackled by a far-superb and less comical The Slayer (1982); and then the stalk sequences often reminds me of Halloween, or at least its clones, with murders that aren't even that graphic. However, thanks to the odd characterization of Avalon's loonie stealing the show with his demented, sweaty, loonie persona, and too the cheesiness of the situation itself, Blood Song is far from being bad.
Fun trashy movie for a trashy afternoon or evening. Recommended for those who wanted to watch a former teen star go sweaty on killing innocent bypassers!

bodycount:
1 male and 1 female shot offscreen
1 male shot on the mouth
1 male strangled to death
1 male gets a hatchet to the face
1 female strangled with necklace, later dismembered with hatchet
1 male hacked to death with hatchet
1 male crushed against the wall by a reversing forklift
1 female presumably killed
total: 9
Posted by Kaijinu at 2:56 PM