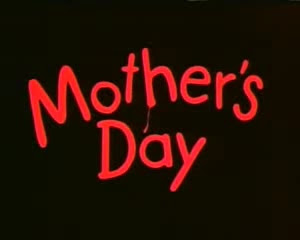 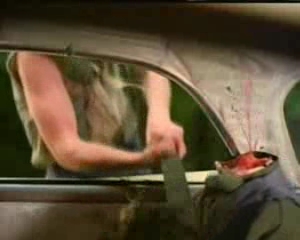 Mother's Day's may not be the best Troma title around, but it is one that deserves its cult following.

Mixing the sensibilities of a slasher film and the outcome of a Rape-Revenge flick, it starts with a hug-a-thon meeting that helps people get along with each other. One said person is ole' Mother, who later accompanies two hippies to her home until her car "broke down". While fixing it, a masked maniac sneaks up behind the car and decapitates one of the hippies while another psycho assaults the other. As it turns out, said killers, Ike and Addley, are Mother's adult sons and as the brothers have their fun, their mum smiles with glee, knowing they've made her proud...

We then switch our attention to three women, Abbey, Jackie, and Trina, who are embarking on their annual camping in celebration of their long-time friendship. But this year, their trip takes a turn for the worse when Ike and Adley spot and kidnap them for some deranged hick-billy fun, subjecting them to a series of rapes, violence and murder. As one of the girls dies from the abuse, the remaining two escape to the woods with a growing urge to wreck vengeance upon their tormentors... 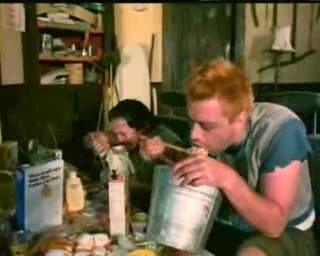 Now, I like my "Rape and Revenge" with some good payback and I like my backwood slashers with some cool villains; Mother's Day is like the unholy baby of the two, mashed with cheddar.

It's refreshingly weird as keeps a lively and cheesy tone despite all that dread and murder, something that would have made this movie no more than a pile of shit but, somehow, it got into my good side and I learn to appreciate the little silliness it reeks out.

Adding to the oddness is the fact that, even if we're supposed to root for the girls to commit justifiably deranged vengeance on the hillbilly maniacs, I came to like the villains more than the girls. They're crazier and funnier than your average deranged bumpkins, living a charming life of comfort under the loving eyes of their mum, eating junkfood as if they're vegetables and protecting her from an unseen figure. (Think of them as the Sawyer clan of Texas Chainsaw Massacre, only with bad teeth! ) The girls, sadly, wasn't fleshed out enough and their desire to get back on the killers is plainly straightforward, leaving these girls as basic as any other slasher victims. Still, when it comes to chaotic killing sprees, the two sides have their bloody moments though it's obvious that the girls did more damage than the brothers.

It's garbled nonsense at its best; this is probably one of the best Troma has to offer in terms of horror flicks. I see a lot of heart went in this one, I can tell by the cabin set they've littered, the cleverly funny script and some good splashy kills, restrained or not. While the special effects mirror its budget and its acting is pure B-movie trash, it's nothing compared to the chaotic mess Troma mostly makes. No offense Troma fans
﻿
Bodycount:
1 male beheaded with machete
1 female strangled with rope
1 female dies from wounds sustained from rape
1 male axed on the groin, choked on hand towel
1 male gets a TV bashed unto his head, stabbed to death with electric knife
1 elderly female smothered with inflatable boobs
2 females presumably killed
Total: 8
Posted by Kaijinu at 3:10 PM