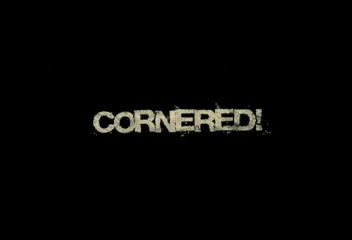 In Los Angeles, a serial-killer managed to evade capture and thus, slaughters as many convenience store employees as he can possibly slaughter. Because the killer steals the surveillance tapes, the cops are baffled by the identity of the killer, offering the public a five hundred grand reward for any info about the killer.

In a trashy convenience store, a store owner and his four employees gathered one night for a poker game. While enjoying a rather equally trashy night of a simple card game, they also discussed the killer and their means of capturing him. Just as if talking about the killer invokes him like Madman Marz or Beetlejuice, the gang of five later finds themselves at the mercy of a masked killer who broke in to their store, hellbent on murder.

Cornered! is not really a title i was expecting to enjoy. The cover looked dull and the action took too long to start, but when the murders gets going, so does the story. Annoyingly, however, there's the usual one-hour mark talk-a-thon between the characters and some of the characters aren't really that likable; they're not bad actors or something, they're actually pretty good, it's just that I can't relate to them. I don't smoke, i don't drink, i don't do drugs and i never do phone sex; it's a little personal, but for me to enjoy a horror flick, a viewer had to relate. Instead, some of these guys just comes out pretty annoying at times, albeit some did had their likable moments. The murders makes it up, thank God, with some inventive kills involving ketchup bottles, circular saws and even ice cream cones (!), all done by the hands of a menacing looking killer (with a very simple, yet cool looking mask); it's a tedious pace to see it, but it's really worth it.

Admiringly, the rest of Cornered! is very likable. Nice camera work, some good creepy moments and some good laughs along the way. It's a respectable entre' that's not too good and not too bad, so long as you're willing to wait, that is.

1 female seen being garroted with cord(opening surveillance video sequence)
1 male seen in half
1 female waffle cone to the eye
1 male stabbed to death with broken bottle, choked on blood
1 male sawed in half with circular saw
1 female decapitated with cleaver
1 male found choked on donuts
total: 11