Looks Like We Got Ourselves a Grockle Problem: Small Town Folk (2007) 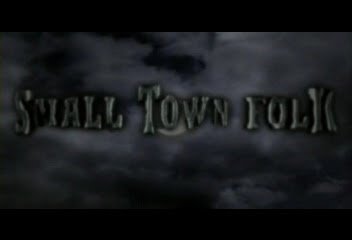 Welcome to Grockleton, a small patch of land owned by an evil "Landlord" who murders anyone who dares enter. Aiding him are his three cohorts, the cross-eyed Pooch, the grunting Pike and the giggling Dobbin. Together, these men kill folks and spare any captured ladies for breeding, which is an unfortunate fact for a small group of lost travelers and bird watchers who have gotten too close to this little town. At that, The Landlord sets everything in motion, calling forth not only his cohorts, but the rest of the equally deranged inhabitants of Grockleton.

But do I hate it?

Well, honestly, my love for colorful villains, some interesting concept, its artsy approach and, yes, my open appreciation for some effort have me feeling tolerable for this mess.

Underrated for some very fair reasons, Small Town Folk fails to do any big impact to make a name for itself. What had me going for this movie is the fact it features a town full of crazies and they're not that bad of a set in my opinion. Each villain has their own defect or talent that also serves as their strength. Whether it's sharpening horseshoes or their savage means to keep the crows off their crops, I always have a soft spot for wide array of villains (Neon Maniacs, The Hills Have Eyes movies, House of 1000 Corpses, need I say more?), but I do still have to admit the bunch here does have their shortcomings as they're hardly terrifying or really all that memorable.

Some of the kills are done offscreen, which may have pained some viewers, but the rest of the murders are by far acceptable if you don't expect too much from it.

Done in obvious shoestring budget, I actually admire the movie's attempt to make it all entertaining as it is weird. There isn't much plot going on with it (since it was intended to be a short film originally), instead we got ourselves a survival horror with some fantasy fairy-tale elements thrown into it. It's obviously poor and confused with its execution, but still, it's not that bad for me. Bodycount:
1 male stabbed with sword, later hacked apart with axe
1 male gets a sickle to groin, hacked to death
1 female seen dead
3 males seen dead
1 female sickled to the gut
1 male sickled to the face, impaled to scythe
1 male had his face bashed in with mallet
1 female killed offscreen
1 male trips head first to a rock
1 male decapitated with scythe
1 male immolated by lit diesel
1 male had a sword thrown through him
1 male had a blown off chimney land on top of him
1 male gets a sharpened horseshoe shot to his face, ran over with car
Total: 16
Posted by Kaijinu at 6:38 PM