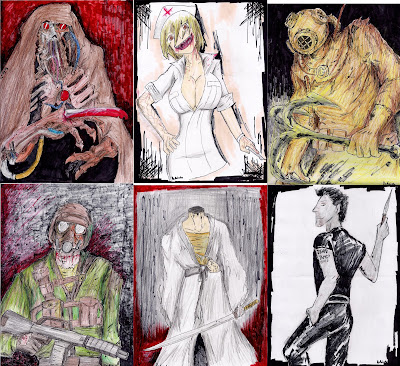 Just a little Project I'm working on, Ward 27 is a twenty-seven card set featuring a variety of slasher monster inspired by the "token" villain stereotypes found in slasher movies as well as some that are rarely used.

Featuring card #001 to 006
1. Scraps- a man-turned living scrap heap of bladed metal and working machine by means of supernatural forces who slice and dices his victims with his own morphing body.

2. Midnight Nurse- an undead, vixen of a nurse who's taking a liking on "tasting" men with her scalpel blade-lined jaws.

3. 40 Depths- a ghostly deepsea diver, curse with immortality to forever guard a mystical hexed gold, who murders anyone who gets near a guarded treasure and hunts down anyone who dares steal from him.

4. Code Red- An undead soldier who took his own life after torturing and murdering war prisoners for fun, stating that not even his country can take away the joy of murder from him. Now, every 4th of July, he comes back...

5. Guro- a headless samurai who's said to be the ghost of a serial slasher who took the life of 99 men and 99 women during the feudal era.

6. Jailbird john- An undead "Rockabilly" who's into sex, drugs, rock-and-roll and the occasional disemboweling.