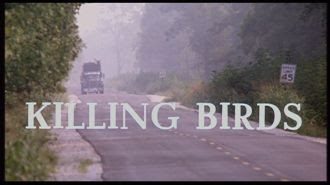 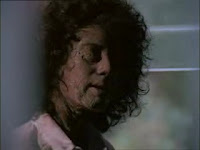 My stubbornness to take the word of some people often gets me into seing things like this. Knowing Italy, when a movie came from them with the tille bearing a number and claims to be a sequel of something, it's more likely an entirely different movie that has nothing to do with the first. (or second...or third). marketed as "Zombi 5", Killing Birds is more of a zombie-slasher than a zombie flick in vein of Mr. Romero's shambling  ghouls, and even more misleading, there are no killer birds here. Well, save the last scene, which is the ONLY scene where some guy got killed by birds...and it's offscreen (Spoiler alert~!)

Coming back from Vietnam, a soldier finds his wife in bed with a lover, sparking a murderous rampage, slitting both the necks of his treacherous wife and her lover, and a random couple with a baby who went to the same house for some unexplained reason. At least he did spare the baby, but this little act of mercy proved nothing for his prized exotic collection of birds, which he kept in a special room of his house, when one of them broke free and clawed his eyes out.

From this point on, we then get treated to some six teens who're out to meet a professor in Lousiana to find an elusive "Ivory-Billed Woodpecker" that was just seen there and study it for their class and extra As. What they didn't know is that the area they are near on happens to be close to the same house where the opening massacre happened. But, like always, they kept going, stumbling into stuff, spooky hallucinations, strange noises, the usual horror gig.

Oh and yes, the murderous zombies out for blood, almost forgot those. 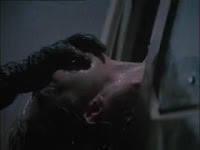 That plot alone was enough to keep this movie up for the go, but there's some problems that we all have to face. First off, I know Italy had this cinematic acting that distinguishes them from American actors, but they could at least make a better, or should I say smarter, characters. I mean I know slasher victims often consist of horny dumbfarts but these guys take the cake! I know there's shock, stunned from fear and whatnot, but you'll stay frozen in shock for two minutes while your friend's being garroted by accident? And the zombies wasn't even responsible for that! 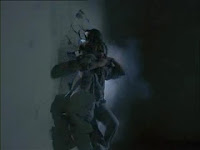 Second, I was really expecting some grue here. But the gore's tamed down to a few painfully stretched and clawed necks, body parts and whatnot. It's gooey stuff, but not as horrifying, tense or creative as any of the rest that shares this movie's sub-genre, be it a slasher or a zombie film.

Third, it' the pacing. Too long for anything to happen, we're treated all the while with a series of unsuccessful scares and freak-outs, and watch these kids act like total buffoon. It's a test of patience, indeed, but after all that waiting and that's the best they could dish out, then i guess I wasted an hour and a half with this one. 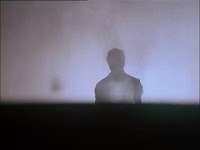 The only plus side I see here is that it looks well-made, with some good cinematography and lighting, and some good make-up on the zombies. But that's all, folks, nothing else.

Horror purists might hold some curiosity on this, and i can't blame ya, but really, don't make my mistake and take my word for it. Rent it, try it and dish it. If you like it so be it. Thank God I just downloaded this flick, though. Now I don't have the burden of keeping this!