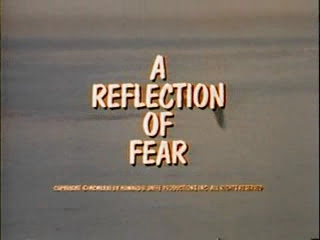 A wealthy playboy returns home to his wife with plans of ending their marriage, only to be horrified as he finds his daughter Marguerite, locked away from the world by his wife and mother-in-law. Living in a world within the four walls of her room, Marguerite spends her time talking to imaginary figures, studying amoebas under a microscope and only has one friend, a boy named Aaron. Upon meeting her father, She's smitten by him, which sets Aaron on a jealous rage that leads to some brutal murders.
This movie came as a surprise for me; it's rarely discussed, poorly promoted and very obscure, you wouldn't even doubt to overlook this but when you do give it a chance, you'll be surprised on how well-made this thriller is.

A Reflection of fear has it all: a gloomy atmosphere that brings out the dread and downbeat nature of the story, some nice imagery to go along with said atmosphere, lighting that brings out the mayhem beautifully and some of the best performances I've seen in an overlooked movie. Sondra Locke plays Marguerite, a seemingly innocent girl who speaks with a monotonous tone and whose presence brings out a cold look. She's quiet, a little too quiet, which was apparently what gave this movie it's sense of tension and uncertainty.

While it does had it's slasher-like elements, the movie is more similar to psychodramas like Psycho or Peeping Tom, where the focus was more on the mystery than bodycount. We watch Marguerite unfold from a fragile disturbed teenager to a repulsed woman who's developing an incestuous feeling for her own father, made more disturbing when she begins to masturbate while listening to her father have sex on another room. The minimal bodycount is to be expected in turn, but the kills are no less entertaining and the attacks are still quiet thrilling.
The finale of the film has us watching Aaron, a mysterious yet obviously imagined figure in his last attack, slowly leading us to shocking twist that may or may not explain the psychosis. I find this a worthy film to recommend with a grade-A cast, wonderfully written script and professional direction, building pace and atmosphere wisely and repays you handsomely.

Bodycount:
1 female strangled to death
1 female bludgeoned to death with staff
1 male implied to have catapulted into rocks
Total: 3
Posted by Kaijinu at 1:30 PM