Feeling a little crazy~ again: Nightmares in a Damaged Brain (1981) 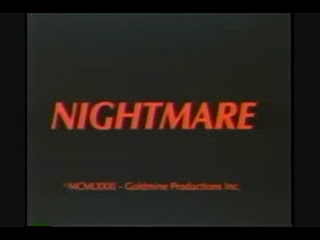 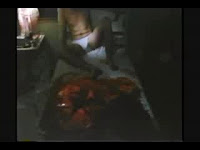 There was a time where slasher flicks became so notorious, people tried to ban them through picking signs and angry mobs of mothers. In the UK, a list of titles was made to incorporate how awful these films can be, labeling them as "Video Nasties". For some horror fans, this can be a dreadful and overdone way to nag at the public for having fun, but for some this might as well be a serpent beckoning you to bite at a forbidden fruit. 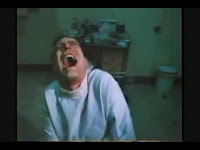 Nightmares in a Damaged Brain (or simply Nightmare in some releases) was a part of this cavalcade, a gory showcase of one man's decent back into dementia after being proven "fit" to re-enter society. 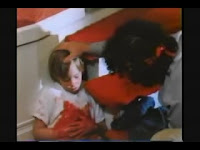 The story follows George Tatum, a schizophrenic man turned insane due to a recurring nightmare involving an axe murder and a child. The doctors who treated him thought that the experimental drug given to him, a cure to manic depression, was working well thus releasing him into the streets to live a seemingly normal life. Turns out the effects doesn't last long and soon, George is suffering from the same nightmares again and began to murder anyone that gets in his way.

All the while, we're also treated to a family with some "child problems"; a certain son appears to have a liking on playing pranks that's overly extreme and feels no remorse whenever he goes too far. Said family soon becomes a target of Tatum, which eventually reveals what ties these two paths together in one twisted climax. 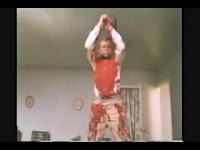 Now, it's not necessarily a bad film, nor is it unwatchable, it's just that Nightmare's very grim and depressing that I find it hard to enjoy it.

While most slasher titles would try to bring something to lighten up the mood, may it be a darkly comic situation or a warm banter between casts, Nightmares is completely devoid of anything inviting and it gets worse to the point that it's almost unbearable for some or just dull to others. Psychological elements, however, did their job well on bringing other forms of dread outside Nightmares' excessive gore (thanks to FX veteran Tom Savini); accompany it with some nice stalkings, a creepy direction that puts more depth in its story than most of its kin, and a family drama with an evil kid, the result would be a still watchable horror flick that gets into you somehow. 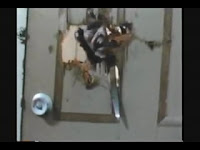 There's some controversies involving medication and the treating of the mentally unstable here, with Tatum being an ambiguous representation of either a rushed treatment or the ethics of treating a man forcibly with chemicals. Tatum's decent to psychosis was hinted only with the use of an experimental drug but it wasn't made clear whether the drug was meant to cure him and fails, or that the drug was the cause of it. A possible reason to be banned, but speculations and very depressing tone aside, Nightmares is still a decent gore flick for slasher fans to enjoy. At some point.

Bodycount:
1 female had her neck cut with knife
1 female found stabbed to death
1 boy killed offscreen
1 male garroted with wire cheese cutter
1 female gets a hammer claw to the back
1 female decapitated with axe (flashback)
1 male axed on the head (flashback)
1 male gunned down
total: 8
Posted by Kaijinu at 5:00 PM