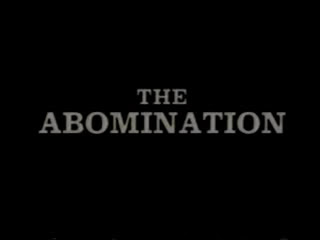 The Abomination almost lives up to its title; suffering the usual sins of shot-on-video films such as lack of proper lighting, horrid acting, lazy script and some bad audio, what saved it from being a total lost were a few things I never came to expect from it.

It follows a guy living with his sickly mother who happens to have a tumor in her lung and is obsessed with a televangelist. (whom the son blames for her social recluse character and failing health) One night, she coughs out the tumor which, for some reason, turns out to be alive and made its way into the son's stomach. He starts to get sick in turn, coughing out more tumors and finds out they can grow to immense sizes once fed with raw flesh. The son soon develops a psychic link to the things and begins killing for them.

It's nothing big of a movie but, I have to say, it's never boring neither; it's more of a slasher film than a monster flick as the title would likely suggest, with the featured creatures hardly doing anything but be stuck in cupboards and stoves while stretching out their tongues to eat a victim. (which they only did for like three times in the movie) Instead, we get our all-too-normal-to-be-threatening teen dude with mama problems bashing folks' head with shovels and cutting throats with knives.

The story lags around at first as it revolves around the antagonist's life before the killer tumors, giving some good insight on how miserable his life is. It's still badly acted as it is badly narrated, but it's passable as a hilariously bad cheese-fest taking about a good hour before the messy stuff happens, a wait well worth it seeing how the splatter in this film matters the most and the twist in the end has its clever moments.

In the end, The Abomination is an oddity that some people could learn to appreciate, while others will cringe at either from the gut-wrenching gore or how bad it is. If you can stand cheese and Evil Dead (1981) level of gore effects, then this is your cup of tea. If not, then keep walking along and mind the munching tumors on your way out.