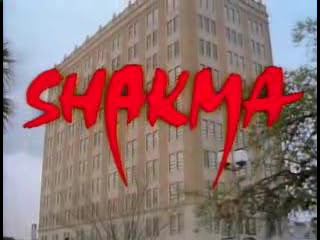 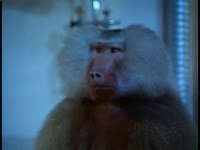 Some killer animal flicks tend to blur into slasher territory as a few titles borrow elements such as point-of-view shots of the villain stalking its victim (or prey) and the methodic demise of victims, who are often teenagers. Jaws can be considered as a forerunner to this with its first half being similar to a POV-lensed slasher film while the last half  was more of an ocean-adventure. Later entries such as Grizzly (1976) and Wolfen (1981) further blur the line as their structure and the beasts' motives were more personal, not unlike that of a human killer.

Here in Shakma, a murderous baboon escapes and starts running amok inside a small research facility where a group of teenagers just happen to be staying as well, playing a fantasy scavenger hunt with a prize money that will be forwarded to their college fund. 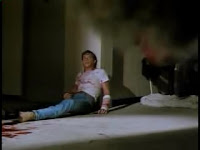 In typical bodycounter fashion, the monkey maul its victims one by one as they try to find a way to survive the night, though these doomed guys and gals are far from your classic partying teenagers as the reason for them being gathered is a sound one, if not overly cheesy. Still, they are guilty of committing the slasher trope of being dumb when the occasion gets the better of them, more precisely when they were trying to avoid getting killed which ranges from doing something very risky to the overly stupid, like using one of them as a distraction while the other runs away. 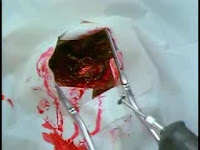 The stalk scenes are pretty intense thanks to the wild nature of the animal hunting these teens, although some of these tend to go on nearly forever and seeing this is a killer animal movie, a part of the actual killings were done offscreen, lacking that much variety apart from the usual mauling. There's also some pacing problems and unnecessary dialogues here and there, which meant we got a couple of slow runs somewhere in the middle of the film where our casts panic like blind mice cornered by a hungry cat. (An allegory not far from the truth) Still, the story's not that hard to follow and there's fun in its simplicity, so I wouldn't call this film a total lost, particularly if you have a forgiving run for animal/slasher films being their basic selves. There are scares abound and an amazing animal performance from a very agitated baboon that is sincerely and simply terrifying and intense.

Though I can tell the film would have been better if it had a slightly higher budget and if the producers made a stronger script and workable direction, Shakma's still a campy good viewing with low-logic cheese that faithfully follows the slasher body with an added bonus of animal attack! Worth a look if you have the time.