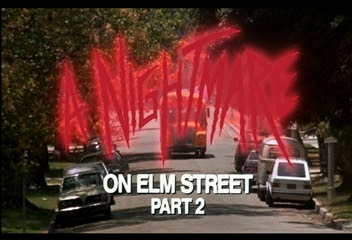 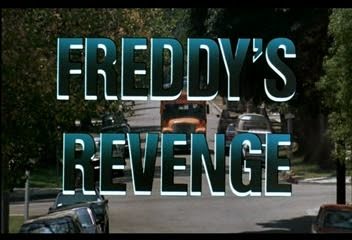 Following up a box-office like A Nightmare on Elm Street is every mega-hit's problem. While production value and costs are often the starting point, "What will happen" is really the big question here and an important one.

Five years after the events of the first, a new family settles in the now infamous Krueger house and it's no surprise that Jesse, the new kid in town, have been coming down with some seriously scarring nightmares (literally) involving a burned guy with a fendora hat, Christmas sweater and knives for fingers. Dismissing these dreams as stress however, Jesse ignores it as much as he can seeing he has real life nightmares to face such as bullies, abusive coaches, and impressing a girl he likes. But when the nightmares begin to force him to do acts of unspeakable horrors beyond the dream realm, Jesse realizes that the man in his dreams is real and he's taking over his body.

Now, Freddy's Revenge's not the best sequel out there but it's a fair game that simply drove off the main path and tried to do something different to flesh out the franchise such as, in here, Freddy trying to break free into the real world. The idea was bound to be a real problem for those who are loyal to the franchise's mythos as it doesn't fit in with the rest of the series' theme. However, I do find very little to complain about this fact since it did give this movie it's own stand-alone flavor as a haunted house/possession movie with a very awesome transformation scene that's painful to watch if you're squeamish about fingernails.

Another aspect here that I find interesting was the fact that most fans, or rather, most horror fanatics out there seems to see a lot of homoerotic subtext coming from this movie. I have no problem with gay people unless they're those "in-your-face" types who act all snobbish as if they're divas. Thankfully this movie doesn't have one but instead, it has a S&M premise where Jesse meet his first victim, a gay coach that terrorized him during one gym class. Incidentally, that guy's death is even a little kinky; stripped naked and getting his hot buns slapped with wet towels before our kid, possessed by Freddy, slices his back open. All the more to hint this subtext includes the fact that our hero is so "feminine" and wussy, the movie's lack of proper onscreen tits, and its unusual number of scenes concerning school showers. Dude's School showers.

It's a little weird for me but it's not all unnerving. In fact, you're only going to notice these once you start looking in between the lines. If there is one thing that I will complain about is this film's rushed "Love conquers all" villain defeat. I can forgive a slasher for being hammy, corny, cheesy, whatever will you call it, but never, and I mean never, put that kind of shit in a film that spends most of its time being grim and gritty for the last 80 minutes or so.

If you're not gonna make a big deal out of all of this, ANOES2 is still entertaining. Poorly executed and a little twisty, it at least marks an attempt to give Krueger a more nightmarish appeal and, apparently, the last time in the 80s for us to see him in his "nightmare man" persona before he starts to kid around and gets cheesier in each sequel. Here, Freddy has more line compared to the last film and is more taunting and playful, even managing to stage a killer parrot scene where the family's pet bird broke free and attacks Return of The Living dead's Clu Gulager. Funny parrot scene aside, the killings in this entry are satisfying enough to favor a fair slasher fan, which boasts a minor classic scene where Freddy attacks a barbecue party at night in complete pandemonium.

So while A Nightmare on Elms Street 2 was more like watching a coming of age drama of a guy who's confused about a lot of things, only with Freddy tossed in, it did a fair job as a sequel. It's still your classic Freddy Kruger and it's still your nightmare realm slasher snuff. Nuff' said!