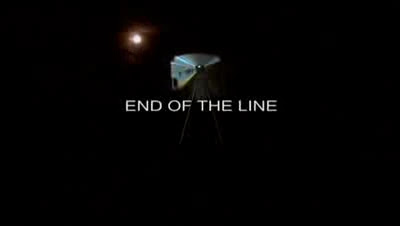 Cult favorite Maurice Deveraux, oh how I love this guy! When it comes to low-budget slasher flicks, he shows creativity and pure knowledge on how to make it all work. While $LA$HER$ showed his prowess around a tight-budget, End Of The Line is a more ambitious work, a daring leap for the sub-genre and one of the most enjoyably shocking slashers in the new millennia.

Coming home late from a hospital shift, a young nurse named Karen, along with a few other passengers get stranded in a subway with some members of a religious (and apparently world-wide) cult. At first, these cult members were very friendly until they all receive a message from their leader who is simply known as "The Reverend", ordering them to "Do Your Duty". This sets off the cultists to "save" as many people as possible by killing them with daggers disguised as crucifix and medieval swords. As the survivors race away from the deranged cult, they also came across chilling visions of demons that may, or may not, be real.

End of The Line stepped into a more thought-provoking position that questions both religion and irreligion, as Deveraux explore this "political" (as I see it) agenda with a neat twist of horror. While the plot isn't entirely new for a slasher movie, no other title has gone to such epic lengths as the religious fanatics here appear to be widely spread, which is unsettling once you realize they are one twisted sense of faith and hope away from snapping and "preparing" themselves for an upcoming apocalypse.

Being a bloody approach to an effectively scary premise showing the darker side of religion, some of the scares here were more on the test of faith and the inner torment inflicted upon both members and non-members alike that really got disturbing at times; one particular scene was grueling to watch as a more rational member gets "tested" by his colleagues to kill his pregnant wife in order to save her. The ending of the film itself even diverse the film from being too "preachy" in favor of irreligion, ambiguous on whether the cultists were right all along or that the demonic visions were nothing but delusions caused by mass hysteria. (I'm becoming more suspicious of the muffins, though. It's a theory, but a very plausible one...)

Production-wise, there's a commendable amount of budget used for the entire run; the subway location, also not entirely new if you've seen Britain's Creep (2004) or Guillermo Del Toro's Scifi creature/slasher hybrid Mimic, turned out to be an effective backdrop for the story. Darkened by a blackout caused by an "Apocalypse", the tunnels become an abyss where anything and anyone can come out, a perfect set-up for the movie's use of Asian-horror inspired scares. The special effects department boasts some great gore effects and impressive looking demon designs. Acting's a little so-so but this is expected from a film filled with no-name casts, though a few of them did stood out. (Robin Wilcock as the sexually repressed young cultist, I'm looking at you!)

It's not as controversial as I thought it would be but it is damn entertaining. There are a few flaws but overall End of the Line turned out to be the best slasher I've seen so far from my favorite cult director.