I wanna try something different for Slasher mask of the Week; for now, I wanted to review those awesome cavalcade of psychos in the cult favorite "$LA$HER$". Here are the six slashers that made the cut, whether it's full mayhem or slick glimpses. 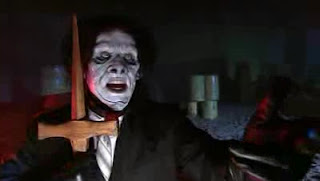 Ah, my favorite killer priest, Preacher Man dons a freaky looking grey face mask that made him look like an undead Bible thumper from hell. It's not that classy, but I can look pass that if he doesn't stop talking in that cool accent of his. My all time favorite killer in this movie. 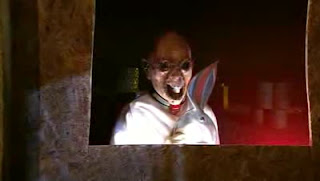 Dr. Ripper's mask consist of a skinned face with a pair of goggles sewn to the eye holes and an oxygen mask. It's pretty cool, so when he stopped wearing it, I was devastated. Should had killed that gal when you had yer chance, doc. 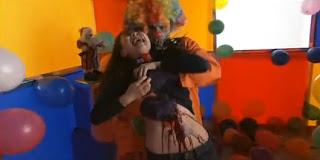 Glimpse in a millisecond, Slasho the Clown's undead mask features a sewn mouth and a rainbow wig. It's silly as it is creepy, I really wish they used him. Oh well, HEY MAURICE! YOU LISTENING?! DO $LA$HER$ 2!!! 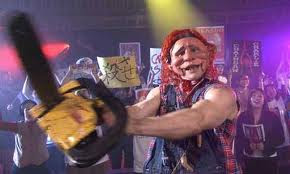 Who could forget the fan favorite, Ole' Chainsaw Charlie's Alfred E Neuman mask is a sure hit and pure originality! I always thought that kid's face is freaky and now someone put a good use to that! Brava, Mr. Devereux!!! 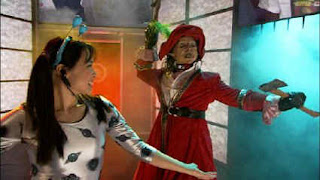 Another Millisecond appearance, Pirate Pete's sheer brilliance! I mean this is the only decent Pirate slasher I've seen and yet, what?! You wouldn't use him?! Darn it! Guess you can;t have your cake and eat it. shit... 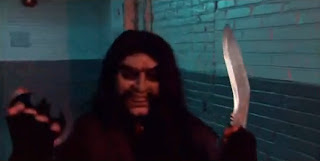 ...I dunno who this guy is, but I think he's wearing a face paint. Um...sorry, but no...glad they didn't use him. (I think he's the Chinese Slasher featured in the opening. Weird, cuz he doesn't look all Chinese like that drawing they made based on him...)
Posted by Kaijinu at 11:36 AM