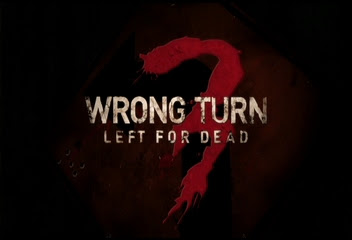 Imagine my glee when I got my hands on a copy of this movie. Now imagine me going home from the video store one sunny Sunday to watch this. Imagine me sitting on my bed and pressing play on my DVD player's remote, the movie starting and the credits rolling as kayaking youths paddle their way through a dangerous current. So far so good.

Now when the teens got hold of land, the dudes go out to look for some shit I never really paid attention to while one girl removes her top. One dude approaches her and gets an arrow shot through his hand, the pointed tip going into the girl's chest. And then it happened: I saw the make-up and it was so rubbery. I looked pass it and soldiered on to see the rest, hoping it's a one time thing. A guy then gets a pike through his head and it was good. Cheap but good. Another guy trips a thin wire trap into springing and slicing the him in thirds. Nice, but what's this? CG blood?  Clean rubbery body?! Oh no...

The scene suddenly cuts to a prison where some inmates, including one obvious American guy who's pretending to be a mafia crime boss, are being transported to another big house. Our hero cop Wilson, who's gonna quit soon to become a lawyer, rides along, talk some character defining talk, meet up with the token fat sheriff, and then continues driving. I'm starting to notice some cheap shit here, like the fact that the car isn't really moving cuz I can tell from the background out of their windows. So different from the shot of the van from the outside.

Night falls and the same truck from the first Wrong Turn film returns and starts bumping the bus off the road. It worked and our prisoners have their breakout, with the cops trying to hold control of the situation until one stubborn guard tries to shoot one of convicts. His efforts are rewarded with a knife thrown to his neck and, expecting whoever killed this guard is on their side, one dumb fucktard does the amazingly stupid; he shouted at Three Finger with glee, asking him to come out. Yeah, um, just because one guy killed a cop doesn't mean he's on your side, dumbass. Obviously, they get attacked and now they're running for their lives, bumping into a surviving girl from the earlier attack (who I will now name "Obvious Survivor Number One"), and tries to find a way to live through the night.

I could go on forever telling you the whole thing but I'll just keep it simple: a cannibal boy (who happens to be the same mutant baby from the last sequel) gets killed. Three finger gets pissed off. More convicts get killed. Sheriff got called because of the reported crash. More killing. Convicts fight each other. Girl gets kidnapped. Mafia boss mano-a-mano with Three Finger. Girl gets saved. Three finger attacks. (and dies?) Survivors walk free.

Now the ending is what pisses me off the most. First off, I know Three finger survived a lot of blows; he got incinerated, shot through the chest with a shotgun and even got impaled, and yet are you telling me he can survive- wait, SPOILER ALERT~! -getting a friggin hook through his head?

If it's not him, then that would be one hell of a relief for me! But til' then. What the hell, man?!

Funny thing, I sometimes find myself watching this movie for laughs but truth be told, Wrong Turn 3 is the misfit of all misfits. God, it was like watching a Syfy movie; everything is cheap! Cheap CG, cheap gore, cheap sets, cheap props, cheap special effects. cheap make-up, and cheap actors. If FOX was cutting back on the budget, then they could've at least try to be creative, but this one is so bad, it blows the franchise's reputation down to the turd.

It's watchable, I think, if you're not up for anything serious but you could do better. I really, REALLY suggest you look for something else.
﻿﻿

Bodycount
1 female gets an arrow shot through her chest
1 male gets a pike through the mouth
1 male split in thirds by thin wire trap
1 male gets a hunting knife thrown to his neck
1 male shot on the head
1 boy beheaded
1 male had his  face slashed off by projected scythe
1 male snared by razor wire net, dragged behind a truck and road rashed to death
1 male gets a pike dropped to his mouth, skewered
1 male set ablaze with molotov cocktail
1 female dies from razor wire wounds
1 male had his head chopped open with hatchet, brain cannibalized
1 dog axed offscreen
1 male gets a hook through his head (?)
1 male gets an arrow shot through chest
1 male killed offscreen with broken car part
Total: 16
Posted by Kaijinu at 2:10 PM