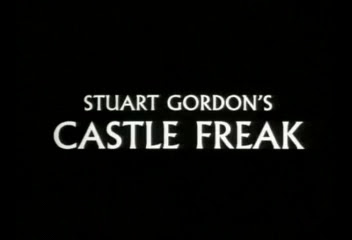 Before new-age technology ravaged Full Moon Videos into cheaper-than-aglet direct-to-video flairs, there was once a time when the company was actually a pretty decent name to know in terms of genre flicks. Not only do they made the most memorable bunch of killer tinies (toys, dolls, puppets, etc.) but they also made some pretty fun and unfairly unsung slasher films, one being the Lovecraft-inspired Castle Freak (1995).

A family with a troubled past comes to Italy, visiting an inherited Medieval Castle from a distant relative who bit the dust after whipping something nearly to death. (Oh, the irony!) This bunch includes a traumatized father (Re-Animator (1985) star Jeffrey Combs) and his wife (Chopping Mall (1986)'s Barbara Crampton), both grown distant to one another after losing their son to a car crash years ago, an accident that also blinded their daughter who they tagged along in this trip.

As bitter as the family is right now, it's nothing compared to what lurks behind the castle walls; chained to a room, a disfigured monster wails in pain and hunger, soon breaking out of its captivity and finding its way to the surface to terrorize the castle's new occupants. With the family drifting apart further and a case of a missing prostitute and housekeeper somehow gets linked to them, is it too late for these poor souls to find the truth behind it all and stop the monster from taking more lives?

From Stuart Gordon, the director behind Dolls (1987) and Re-Animator (1985), Castle Freak (1995) is one of his many lines of Lovecraft-based horror flicks, though not as nearly faithful to its literary origins as his Re-Animator or his Masters of Horror episode Dreams in The Witch-House (2005) did. In turn however, the film captured a well-twisted take on Lovecraftian fear of dwindling madness among the sane as inner demons continue to torment the family, forcing them to face it all in order to save themselves from a real threat. This mentioned, there's a lot of drama going whenever the film's not serving body parts through kills and gore, instead giving the entire film a tragic feeling and a dark atmosphere.

This being said, I am glad that the casts made their roles work in their finest performances. As for our monster, the freak itself is well made in terms of visually fluid and very realistic looking make-up effects, as well as being characterized as a tragic villain that serves as a perverse mirror to our family's dark past.

Castle Freak (1995) deserved its cult status and more; depressing, intense and a shocking monster-slasher movie with a lot of black heart, it's a good look back to the good ole' years of simplistic Gothic horror.