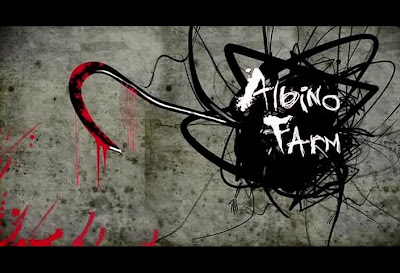 And to think I've seen all the abysmal deformations my slasher collection can throw at me.

In this little Wrong Turn-inspired creeper, a small group of college students out on the road looking for small-time urban legends to research for their book hears from a local gas stop the legend of the Albino Farm. Word has it that it's a place where oddities lived in isolation out of fear of exposure and ridicule, located somewhere deep in the Ozark Mountains. Thinking they found a new entry for their book, the teens venture on to said mountains and end up in a town where the locals act odd and are born with some defects (deaf, mute, fused fingers, etc), seemingly uneasy with the kids after they start asking about the Albino Farm. After a few run-ins with trouble, they eventually discover the infamous farm and what awaits them there wants nothing more than to slaughter them.

What got me liking Albino Farm is the simplicity of the story; it's used way too many times, but the film made it work as far as it can by giving us good atmosphere and nicely done special effects despite the fair budget. It also have some good build-up and creepiness, achieved by utilizing the movie's isolated location, tapping on the uneasiness of unfamiliarity and the fact that they're outnumbered by strange and possibly dangerous locals.

If I could point out any flaws, it's probably the movie's lack of that much slasher action due to very little number of victims running around; it wasn't too long before we're just down to two or one leads, neither are that root-worthy as the previous victims are also killed off way too soon and the murders are a bit on the uninspired side, but at least the villains committing them made it worthwhile to look at.

It's cliched and overdone, but it could have been worse. Albino Farm's that one title in the bunch that's worth a rent or two in those boring nights. Fans of mutant inbreds will love the deformed devils in this title, and too those who's open to look into little unknowns like this once in a while.